Having introduced his USD 2 trillion infrastructure plan, Joe Biden aims at upgrading the foundational parts of the US economy; He considers it a transformational initiative “that does not tinker around the edges” and that could create the “most resilient, innovative economy in the world.”

US officials also claim that the plan will accelerate the struggle against climate change by embracing and reinforcing cleaner energy sources but also through a less “energy-hungry infrastructure”. It is said that essential parts of the plan target 20,000 miles of repaired/rebuilt roads, upgrades for the most economically significant bridges, the replacement of lead pipes from water supplies and eventually a framework that will create millions of and reinforce American competitiveness in the long run.

The cost of the bill is supposed to be supported by increasing corporate taxation over 15 years (something that Wall Street was not very happy to hear, but that’s another story) and even more from multinational corporations earning and declaring profits overseas.

Obviously, this is an effort to bring capital back to the United States through reverse/negative incentives. The deployment of the plan will span for over the course of eight years and the tax increases would more than offset that spending in 15 years hopefully bringing a decrease of the US deficit. Biden pledged that, in order to fund the project, he would raise corporate tax rates to 28% from 21%, contradicting a cut signed by Donald Trump.

Joe Biden will also take steps to raise taxes on multinationals, pushing forth taxation of profits earned and declared overseas. Those measures would include a minimum tax rate on global profits and reduce legal loops allowing companies to reduce their American tax liability. Mr. Biden would also add a new minimum tax on the global income of the largest multinationals, and he would enforce it through stricter controls by federal tax agencies. He claimed that these provisions alone could generate more than 1 trillion in tax income for the US.

The president also appealed to a sense of tax fairness said the plan would make America competitive again (mostly meaning against China), proving that a fair capitalistic system is the way to go.

Joe Biden requested bipartisan support in Congress, stating: “Unlike anything we have seen or done since we built the interstate highway system and the space race decades ago” and calling the initiative “the largest American jobs investment since World War II.” 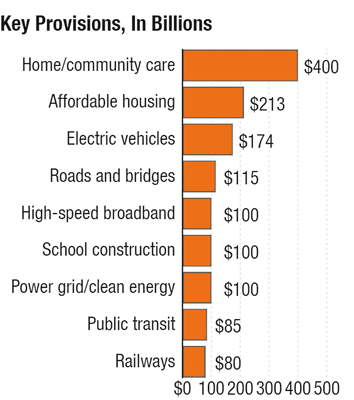 In a nutshell, the USD 2 trillion proposal includes:

More specifically regarding the clean energy infrastructure, it is by itself an ambitious comeback to the Paris climate deal (from which Trump withdrew the US) and seems to be one of the most important initiatives ever taken by the US to lower greenhouse gas emissions, competing with China (which has proven to take the matter extremely seriously and with a great rate of effectiveness).

The package includes significant environmental agendas: The New Deal-inspired Climate Conservation as well as catalyzing an irreversible shift from ICE (internal combustion engines) to electric vehicles. Biden will spend billions on rebates and tax incentives to encourage Americans to purchase electric vehicles, and he proposes paying for the transition of thousands of transit and school buses from diesel to electric.

At the same time, he wants incentives for state and local governments to build electric vehicle charging stations to power those new cars and buses. This is arguably great news for EV companies like Tesla and traditional automakers who are now shifting to EVs.

A deeper dive into the specifics of the plan gives us more insight over the different aspects of the bill:

The US president’s pledge to renounce Trump’s policies that moved America away from the fight for climate change, is being materialized largely through his bill. Updating and upgrading the country’s infrastructure to be more energy-efficient and more resilient towards environmental threats (cyclones, hurricanes, droughts, fires etc.) is one way to do it. On the other hand, investing on research and development will ultimately deliver breakthroughs in cutting-edge clean technology, bringing America back to the front lines of this global race.

The main dual axis around which Joe Biden wants his policies to be deployed is that of cars and electric power plants, which are the main polluting factors to this day. The US administration wasn’t to push the use of electric cars, which today make up just 2% of the vehicles in America. More specifically, the plan provides more than 150 billion USD to incentivize manufacturing and purchasing of EVs through tax credits and other incentives to EV manufacturers to keep and scale up production in the United States instead of China. This is a direct invitation to Tesla, among others. The plan includes additional funds for federal procurement programs for all federal agencies to replace their fleets of vehicles with electric ones.

When it comes to the grid modernization, the plan provides almost USD 100 billion to enhance reliability to avoid incidents like those that recently devastated Texas. There are also provisions for installing lines to connect major urban centers with clean energy generating plants. Joe Biden also introduced the ‘Clean Electricity Standard’, as a mandate imposing that a certain percentage of electricity in the United States be generated by RES and 0 emission sources (like advanced nuclear).

Importance is also being given to federal transit routes, like railways; the California High-Speed Rail Authority (CHSRA) is a prime example of a troubled project that has been stalling for a long time now and could be saved through this bill. The project itself, with projected costs reaching almost USD 100 billion, is now under construction, a 171-mile section between Merced and Bakersfield, has to rely on the state legislature giving green light to the California High-Speed Rail Authority to exploit the USD 4.1 billion in bonds to push for the project’s completion. The infrastructure plan mentions specifically Amtrak and expresses the will to connect cities with rail service.

Of course, as we already discussed, this bill and its context do not lack controversy and opposition. Introducing such dramatic shifts in how such an economy works can require expertise in terms of ‘change management’. There are such cases that will definitely not make it easy for Joe Biden. For example, during his campaign, Joe Biden opposed hydraulic fracturing (fracking) in the fierce battle with Trump over state of Pennsylvania, which heavily relies on shale natural gas production, which requires the use of fracking. It needs to be mentioned that fracking is one of the most condemned practices of extraction from an environmental standpoint. When they realized that Trump would exploit these comments and claim Pennsylvania, the Biden camp denied that he ever made these comments and eventually he appeared in Pittsburgh and pledged that he would not in fact ban fracking and underlined that natural gas would be part of his administration’s energy plans.

The infrastructure project advisory firm ARBO, is very critical stating that: “For a campaign whose slogan was Build Back Better, the fact that the title of its supposed major infrastructure plan makes no mention of either building or infrastructure is telling. The plan essentially has morphed into a jobs plan that has limited spending on true infrastructure. He only mentions of carbon capture and storage come in two very small projects that involve use of the technology for retrofitting large steel, cement, and chemical production facilities in environmental justice communities and as part of a plan to invest in demonstration projects in various areas including utility-scale energy storage, hydrogen, advanced nuclear, rare earth element separations, floating offshore wind, biofuel/bioproducts, quantum computing, and electric vehicles.”

They have also been very critical on the fact that the ‘EV lobby’ seems to gain the lion’s share, leaving hydrogen’s promising potential in the shadows.

Wrapping up, such an ambitious plan is totally natural and expected to attract much attention and definitely controversy.

Afterall, it claims that it will change the outlook on America’s imprint on the world of tomorrow. Of course, change management will be essential, especially for a country that has been proudly declaring that its environmentally unethical practices have been a landmark and part of its identity.

Banning fossil fuels from the mix might seem necessary for many but definitely not for everyone, especially if they are making money out of it.

Only time will tell if this plan will push through and change America, or not.