Romania and the US on October 9 initialled an intergovernmental agreement for building Units 3 and 4 of Cernavoda Nuclear Power Plant, for retrofitting Unit 1 and for cooperation on various levels in the civil nuclear field in Romania. Besides this agreement, a Memorandum of Understanding was signed with EXIM US (the Export-Import Bank of the US) for USD 8bn financing for the development of nuclear projects, as well as in other fields, such as that of transport.

“Romania today takes a huge step forward in the development of the strategic partnership it has with the United States of America, regarding the energy component, respectively cooperation in the civil nuclear field. I promised and I delivered a strategic mission: Identification of partners from NATO states for Cernavoda Reactors 3 and 4. The agreement initialled today with the Secretary for Energy of the United States of America, Dan Brouillette, allows us to have US technology and expertise for both Reactors 3 and 4 and for retrofitting Unit 1, keeping CANDU 6 technology, within a wider Euro-Atlantic consortium, representing countries part of NATO, and with financial support from the involved partners,” said Virgil Popescu, Minister of Economy, Energy and Business Environment. 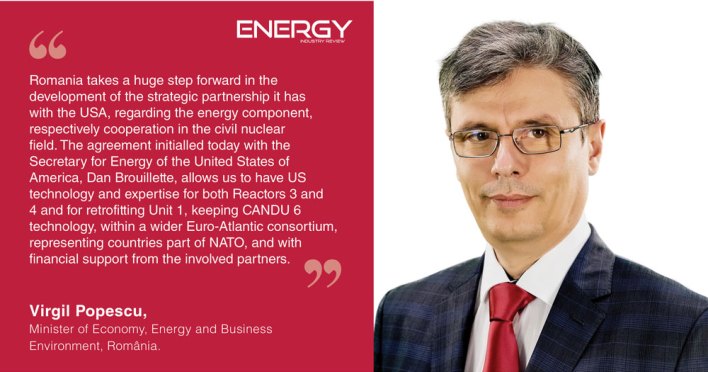 “Moreover, the framework of an extensive cooperation between Romania and the US in the civil nuclear field is created. At the same time, we want to have as partners, besides the US partners, the Canadians and French. We prove today that serious, predictable partnerships can be obtained if there is political will and sustained work. For SNN this partnership is particularly important for the development of the company, which is on an upward slope, especially after entering the FTSE Russell indices. I congratulate SNN for the work done so far and encourage it to implement, with responsibility, the next steps,” Virgil Popescu also mentioned.

“This project in Cernavoda, worth USD 8 billion, under which Unit 1 will be reconditioned and Units 3 and 4 will be built, will contribute to Romania’s energy independence and represent a paradigm of the future Romanian-American projects of economic and energy development. The project will be coordinated by AECom and involve a consortium consisting of companies from the US, Canada and France,” shows a statement of the US Embassy in Bucharest.

Most likely, the turbines will be American, from General Electric (GE), and reactors – from Canada (CANDU), but France’s Framatome and Italy’s Ansaldo will also be involved in the project.

AEcom is a major US engineering company, activating in over 150 countries, with revenues of over USD 20 billion obtained in 2019.

According to the Agreement between the Government of Romania and the Government of the United States of America on cooperation regarding the nuclear power projects in Cernavoda and in the sector of civil nuclear energy in Romania, the initialling phase represents reaching an agreement in principle on the text and main elements of development of the projects and on the parties involved, the draft agreement following to be sent to the European Commission according to the provisions of EURATOM Treaty, cooperation within the agreement being subject to national, European and international provisions. The purpose of the Intergovernmental Agreement is development of the civil nuclear program in Romania by ensuring the technical, regulatory, nuclear security and safety expertise and, implicitly, strengthening the diversity, safety in operation and energy and environmental stability of Romania, objectives also associated to the investment projects of Nuclearelectrica (operator of Cernavoda NPP), retrofitting Unit 1 and extending the capacity of Cernavoda NPP. In addition to the current projects, Reactors 3 and 4 and Retrofitting of Unit 1 of Cernavoda NPP, the agreement also provides for cooperation in the long and very long term through the possibility to develop small modular reactors in Romania, on a site to be determined, in order to ensure in the future the flexibility and strengthening scalability of nuclear technologies.

“The technology used in the development of reactors 3 and 4 will be CANDU 6, similar to the one currently used in units 1 and 2. Regarding the financing component, the US expresses its firm interest in using Exim Bank, US International Development Finance Corporation and other financing institutions applicable and available in the US to support the global financing of the projects,” the statement also shows.

Deloitte and Kinetrics to update the feasibility study

The company EnergoNuclear, fully controlled by the state-owned company Nuclearelectrica (SNN), has recently completed the simplified public procurement procedure without electronic tender launched in summer, for contracting a consultant to update the feasibility study for the execution of the project of building reactors 3 and 4 of the power plant, the initial study dating back in 2012. The contract for updating the feasibility study was won by the Romanian division of Deloitte, in consortium with the Romanian subsidiary of Canada’s Kinetrics, at the price of around RON 783,000. A single other bidder participated in the procedure, i.e. EY, having as subcontractor the company Canadian Nuclear Partners, controlled by one of the energy giants of Canada and North America, the state-owned company Ontario Power Generation, which owns CANDU nuclear power plants like the one in Cernavoda, controlled by the government of the Canadian province of the same name. According to the tender specifications, winners will have about 3-4 months available to conduct the feasibility study.

“Updating the feasibility study will consist of preparing a document that will contain at least the following: updating the forecast on electricity price and demand for a long term in the domestic and regional market; updating the cost of the project of units 3 and 4 by developing a methodology allowing an accurate evaluation, updating the financial model of the project taking into account the current situation both in the energy market and in the market of construction services; new relevant technical information obtained from other studies prepared by the care of SN Nuclearelectrica SA or EnergoNuclear SA, after 2012; updating the information regarding the power transmission infrastructure in Romania and the new interconnection lines; re-certification of the technical feasibility of the project; identifying the support mechanisms necessary for implementing the Project (e.g.: CfD, CWIP, state guarantees etc.),” reads the tender documentation. The updated feasibility study will also have to include a financial analysis targeting only the execution of unit 3 of Cernavoda NPP.

According to the announcement made by US Ambassador to Romania Adrian Zuckerman, the US will also make several investments in the transport infrastructure in the region. Therefore, the US will start a new project for Romania, together with Poland, for building a highway and a railway, to link Constanta, at the Black Sea, to Gdansk, at the Baltic Sea. Investments come in the context where Romania and Poland are the central point of the Euro-Atlantic defence against Russia’s aggression against the eastern flank of Europe.

At the same time, Romania will soon host more American soldiers. “This infrastructure project will represent a huge benefit for the economies of Romania and Poland, as well as for the economies in the region, for years to come,” said Adrian Zuckerman. Economy Minister Virgil Popescu specified that the project could include the restoration of the port infrastructure in the Port of Constanta.

Therefore, Romania and the US benefit from new steps of the strategic partnership launched on July 11, 1997, on the occasion of the visit to Bucharest of US President Bill Clinton.