Gazprom reduced its gas emissions by 3.52 million tons of СО2 equivalent in 2019.

Gazprom took stock of its environmental activities in the year 2019 as presented in the Environmental Report published on the Company’s website.

Last year, Gazprom achieved all of its Corporate Environmental Targets. The Company saved 3.3 billion cubic meters of gas, 330.3 million kWh of electricity, and 252,700 Gcal of heat. At the same time, gas production rose by 0.5 per cent to 500.1 billion cubic meters.

Thanks to its environmental advantages, natural gas plays a major role in the implementation of the United Nations’ Sustainable Development Goals and the Paris climate agreement, contributing to low-carbon economic development in Russia and the countries that import Russian gas. 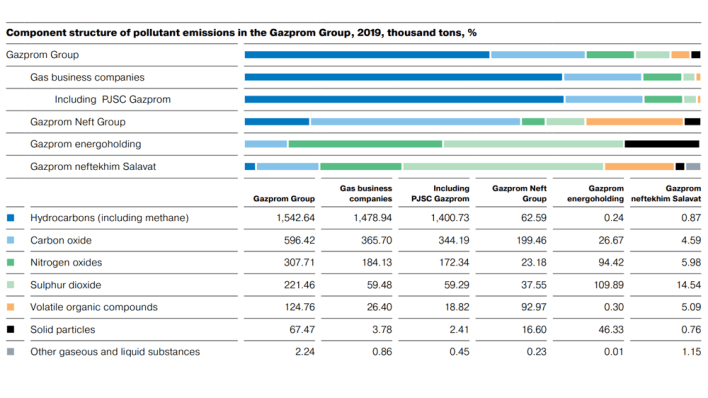 Gazprom is adopting the best available technologies, paying the utmost attention to energy efficiency improvement, and working to reduce the carbon footprint of its products. For instance, the amount of greenhouse gas emissions from the supplies of Russian gas via the Nord Stream and TurkStream gas pipelines is more than three times lower than that from LNG supplies from the United States to Europe.

The Gazprom Group’s greenhouse gas emissions fell by 3.52 million tons of СО2 equivalent, or 1.5 per cent, in 2019 compared to 2018. In addition, Gazprom was the first Russian company to calculate the amount of its emissions using the 100-year Global Temperature change Potential. As a result, the actual carbon footprint from Gazprom’s production activities proved to be lower by another 25.2 million tons of СО2equivalent. This calculation was meant to provide a more accurate picture of the impacts made on the climate system by emissions, taking into account the recommendations of the Intergovernmental Panel on Climate Change (IPCC).

Gazprom maintains high standards of information disclosure and consistently expands the scope of the data disclosed, including those related to environmental issues. For instance, the Company used to include emissions of two types in its assessments: direct emissions generated in the course of the production activities of Gazprom’s facilities, and indirect emissions generated in the course of supplying energy to those facilities. In 2019, Gazprom expanded the scope of the data provided and became the first Russian energy company ever to assess indirect greenhouse gas emissions resulting from the use of the products sold by the Group. According to the assessment, the carbon intensity of combustion of the Gazprom Group’s products by end-use consumers totalled 301.63 kg CO2e/boe. This is the lowest rate among the world’s largest oil and gas majors, which is in line with the CDP (Carbon Disclosure Project) assessments made earlier.

As usual, the corporate hydrocarbon reporting materials, including the calculation methods for greenhouse gas emissions, have received independent verification by KPMG, an international audit and advisory company.

One of the key climate impact indicators is a carbon footprint (greenhouse gas emissions of the entire production chain). The methane-to-CO2 equivalent emission conversion factor has essential importance for assessing carbon footprint in the gas sector and the agricultural industry. According to the latest Fifth Assessment Report of the IPCC, the value of the metric known as the Global Temperature change Potential (GTP) for a 100-year time horizon is becoming increasingly important. However, a 100-year Global Warming Potential (GWP) is commonly used in the calculations today.

The Carbon Disclosure Project is a non-profit partnership that includes over 500 international financial institutions with assets exceeding USD 106 trillion. CDP maintains the world’s largest database on greenhouse gas emissions, which is used for investment decision-making. More than 8,000 companies from 120 countries all over the world, including major companies of Russia, disclose their environmental information through CDP.