KMG International Group recently opened a new Rompetrol gas station in Georgia, near the tourist resort of Borjomi – famous for its brand of carbonated natural mineral water exported to over 40 countries.

Located in the centre of Georgia, the unit is part of the new concept of Rompetrol gas stations in Romania and in the region – the Republic of Moldova and Bulgaria, characterized by the new visual identity elements of the brand, a modern architecture, and by the quality of materials and finishes.

In addition to the Fill & Go Card pump payment service, it offers the Efix and EfixS fuel ranges produced by Petromidia refinery, ensuring an increase in car performance, efficiency, and engine reliability. In addition, EURO 5 fuels also contain a mixture of active components for engine protection, ensuring its proper operation.

“In the context of the general crisis caused by Covid 19, the main priority of the company was to protect our employees and customers, while managing to continue our investments, with a major impact in supporting local and central budgets, but also in creating new jobs. This year we have opened six new gas stations in Georgia, and we intend to open four more during the upcoming period,” said Zamanbek Mirzayanov, CEO of Rompetrol Georgia. 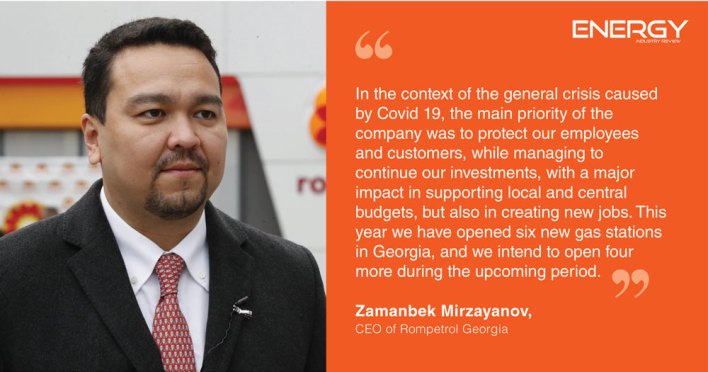 Founded in 2005, Rompetrol Georgia is well known on the local market as a distributor of high-quality fuels and one of the most important oil companies.

The subsidiary of the KMG International Group operates a distribution network of 85 filling stations and 2 fuel depots. Besides the distribution network, the company performs wholesale activities through the Batumi Port depot (28,500 cubic meters), as well as through the Tbilisi depot which has been completely modernized, increasing the storage capacity from 6,500 tons to 10,000 tons.

Borjomi springs were discovered in the 1820s, being fed by water that seeps from glaciers that cover the peaks of the Bakurian mountains at altitudes of up to 2,300 m.

It’s a mineral water of volcanic origin and, according to natural standards, it is over 1,500 years old. It rises to the surface from a depth of 8-10 km, enriching itself in the process with about 60 minerals found in the rock layers of the Caucasus Mountains.