Widespread in our modern societies, nickel is essential to many industrial sectors, as well as for the construction industry. At the moment, it is not a critical metal. However, manufacturing of electric vehicle batteries has accelerated growth in recent years, requiring significant adaptation efforts from the nickel industry.

Appreciated especially for ductility, malleability and for oxidation resistance, nickel is mainly known for its use in stainless steel. This use accounts for around 70% of global nickel demand. It is also used in the manufacture of alloys (8%), special steels (8%), coatings (8%) and, finally, more and more, electric batteries (5%).

Nickel is relatively widespread in the world, with land resources estimated at 300 million tons, of which 60% correspond to laterite deposits (mainly in Southeast Asia) and 40% to sulphide deposits (South Africa, Canada, Russia). Australia is the only country that has significant quantities of these two types of deposits. Laterites are easier to process and, therefore, were initially preferred for the design of nickel-based products (USGS, 2021) (Nickel Institute, 2016). Nickel reserves are estimated at 94 million tons and are mainly located in Indonesia (22.4%), Australia (21.3%), Brazil (17%), Russia (7.3%), Cuba (5.9%) and the Philippines (5.1%). We should also mention South Africa (3.9%), which, although it is not one of the large producing countries, still has significant sulphide type reserves and strategic potential for the future.

Nickel products are split into two categories depending on purity.

The so-called class 1 nickel has a nickel content greater than or equal to 99.98% and generally comes from sulphide deposits. Therefore, it has a high level of purity and a high production cost. Powders, briquettes, cathodes or even granules belong to this category. Class 1 nickel is the only nickel suitable to produce nickel sulphates used in the manufacture of batteries. Approximately 55% of global primary nickel production is class 1 nickel (The Nickel Institute, 2016).

Class 2 nickel (alloys and ferronickel for example), from laterite deposits, has a lower level of purity, and is mainly used in the stainless-steel industry.

As mining, the geography of primary nickel production – obtained after smelting and refining nickel ores – has undergone transformations. In mid-1990s, Russia, Canada, Brazil, and some European countries (especially Norway, Finland, and the United Kingdom) dominated the nickel smelting and refining activities. But these countries have gradually lost their influence to the benefit of Asian countries. In 2017, China covered 31.2% of nickel products, followed by Indonesia (10.3%) and Japan (9.4%). Russia (8.0%) and Canada (7.9%) complete this landscape (INSG, 2019).

The IFP Energies nouvelles (IFPEN) research team used the TIAM-IFPEN model (Times Integrated Assessment Model – IFPEN) to assess the cumulative demand for nickel by 2050 based on two climate scenarios: a scenario called 4°C corresponding to an increase in temperature of 4°C at higher pre-industrial levels (4D scenario) and a more ambitious climate scenario that limits the rise of temperatures to 2°C (2D scenario). Then it applied two mobility scenarios to each of these climate scenarios: the first, in relation to mobility ‘Business as Usual’ (BAU), corresponds to a continuous growth of properties and a greater dependence on vehicles. The second refers to sustainable mobility, where the use of public and non-motorized transport is favoured, as well as an integrated approach to planning and investments in the use of land and urban transport.

For each mobility scenario, the research team considered three mixes of Lithium-ion battery chemistries, identical to those studied for cobalt:

Class 1 nickel can be produced from sulphide deposits, a process that requires a high level of initial investment due to the depth of these deposits. It can also be produced from laterite ores, but while the mining is easier, their quality is lower, generating additional costs to upgrade them to class 1 nickel. High-quality nickel production could be insufficient in the medium term, for several reasons. First of all, the increase in the production capacity has so far targeted the class 2 nickel. For many years, the low price of the metal did not encourage investments in the more expensive class 1 nickel production.

It should be mentioned that the discoveries of sulphide deposits with potential for class 1 nickel production were less significant than those of laterite deposits in the last 20 years. Finally, class 1 nickel is also used in the stainless-steel industry, which puts additional pressure on this category (EC, 2018).

Ensuring the supply of class 1 nickel will therefore require the launch of new mining sites, as well as additional production capacities for intermediate and refined products. Countries with a rich pool of sulphide-type resources could therefore benefit from the future growth of class 1 nickel. 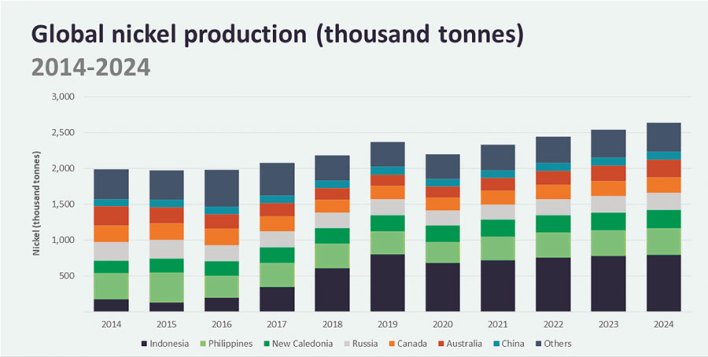 With its large reserves, Russia seems better positioned to reaffirm its position in the ranking of mining producers. In fact, Nornickel is already one of the largest global producers of class 1 nickel. The large-scale distribution of electric vehicles is also an opportunity for South Africa as well as central and eastern Africa where increasing numbers of exploration projects are on the rise (USGS, 2019).

The fact is that Indonesia and the Philippines, with laterite deposits, also have a role to play in ensuring nickel supply for the battery industry. While class 1 nickel production is made from sulphide deposits for reasons of simplicity, it is also possible to produce, through a high-pressure acid leaching (HPAL) process, a sulphide/hydroxide mixture that can be used as a raw material for the production of nickel sulphate.

Indonesia is the country that has set the target to develop this type of infrastructure. Therefore, it has launched several HPAL plant projects, while two such plants are already operational in the Philippines. Primary nickel supply in these two countries remains uncertain, as shown by recent events. Aiming to take more advantage of the economic benefits of exploiting its resources, Indonesia has implemented a ban on their use. Concerned about the environmental impact of extractions, the Philippine government has stated its intention to introduce stricter regulations for the mining sector, even if this means closing some sites, which has increased fears of poverty.

Therefore, the risk for the supply of class 1 nickel does not affect in the same way all consuming countries.

China, the largest nickel consumer in the world, depends to a large extent on Indonesia and the Philippines for its supply and, therefore, on the strategies adopted by the two countries.

In turn, the United States consider that the security of nickel supply is satisfactory and did not include this metal in its list of 35 critical metals, despite its weak domestic production. However, vehicle manufacturers such as TESLA warn on the need to increase global production of class 1 nickel. The country however seems to be able to matter on the proximity of its Canadian neighbour, which has rich sulphide reserves.

In the end, the European case raises questions. Although nickel production on the European continent is insignificant, approximately 2% in 2016 (USGS, 2016), the metal does not appear in the list of critical materials established by the European Commission. The European Union aims however to become a player in the manufacture of electric vehicle batteries, an ambition materialized by the launch in 2017 of the European alliance of batteries, named ‘Airbus batteries’, a project for the development of an industrial sector that makes possible the reduction of continent’s reliance on China and Korea.

In one of its latest reports on this issue, the European Commission warns however about a nickel supply shortage for battery manufacturers by the end of 2020s and insists on the need to implement a robust battery recycling sector (Fraser, 2021). Volatile, nickel price could slow down investments.

The ‘devil’s metal’, possible supply deficit in the next 10 years

Nickel, which is listed daily on the London Metal Exchange, is considered to be one of the most volatile metals, which earned it the nickname ‘devil’s metal’. Many factors influence the price of this metal, but in recent years the uncertainty related to trade and industrial policies of the main producing countries, Indonesia, and the Philippines in particular, has contributed the most to price changes. Despite the recent rise in prices, nickel prices remain low compared to the highest level of 2007-2008, when prices reached almost USD 40.000 per ton.

The structural volatility of prices and the price levels noticed today do not encourage investments in this sector or in that of nickel processing – especially regarding class 1 nickel – auguring a potential supply shortage by 2030.

The electrification of vehicles by 2050 is expected to lead to a four-fold increase in the nickel demand in a 2°C scenario.

Nickel-related risks are economic and strategic: