Most of the refineries in Europe are in full upgrading process, new modern technologies being implemented, in which human workforce is replaced by machinery. This leads to cleaner processes, lower costs, increased efficiency and productivity. The same happens in Romania. The entire refining sector, as the entire energy industry, goes through a period of deep transformation, supported by ambitious investments.

PETROTEL-LUKOIL has recently announced new investments exceeding USD 30 million by 2020, in order to improve environmental performance. Thus, the refinery will allocate USD 7 million to upgrade the coking plant (Stage I), a process that will reduce process emissions to zero. Also, the amount of USD 25.9 million will be allocated to build a new sulphur recovery complex, which will virtually reduce accidental sulphur oxide emissions to zero.

The Ploiesti-based refinery was taken over by LUKOIL Group in 1998. At the time, the facilities of the refinery were partially obsolete and did not comply with the environmental legislation. The new shareholder started an extensive investment program, in both technological and environmental objectives undertaken upon privatization. Starting with 1998 and until 2005, investments have been made in environmental protection works, worth approximately USD 11 million. The results were reflected in the reduction of sulphur dioxide emissions by approximately 35% and volatile organic compounds emissions by approximately 20%.

In 2007, the refinery received the Integrated Environmental Authorization and with it the Action Plan for compliance with the national and European requirements. From 2008, a new investment stage started, in projects related to environmental factors and to carry out all measures included in the Action Plan. The total volume allocated by LUKOIL for refinery’s compliance was USD 120 million.

Completion of each investment project led to a significant improvement of environmental factors and especially of air quality. Thus, starting with 2011, the ‘LowNOx’ combustion system has reduced the emissions of nitrogen oxides in the stacks of technological furnaces by approximately 70% and the powder concentration has decreased by about 8 times. Starting with 2012, by completing the refinery gas scrubbing plant, the concentration of sulphur dioxide in the gases exhausted in the atmosphere decreased by 90 times.

In early 2015, PETROTEL-LUKOIL completed the last investment project within the Action Plan, commissioning the flue gas scrubber plant from the Fluid Catalytic Cracking (FCC) complex. The performances achieved were remarkable. Emissions of sulphur oxides dropped 30 times, and those of powders 15 times.

LUKOIL’s energy division managed to implement a modern combustion technology allowing the incineration of a wide range of fuels while meeting emission limits. Commissioned in 2011, the new thermal power plant (installed electric power of 61MW and rated thermal input of 300Gcal/h) uses a circulating fluidized bed boiler technology that can burn almost any type of fuel and provide the refinery’s thermal power needs. Besides the fact that it provides flexibility for fuel, the mentioned technology also ensures a higher profitability while reducing emissions. Moreover, electricity production allows a financial optimization of electricity acquisitions.

Overall, investments in renewable energy sources allowed an annual reduction of emissions of greenhouse gases by 220,000 tons of CO2. 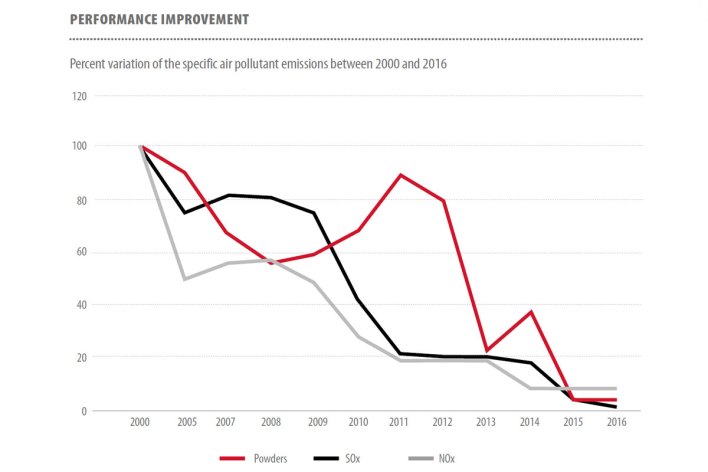