The shale revolution has come about due to two enabling technologies: horizontal wells and hydraulic fracturing. More recently there has been an increasing emphasis on research into perforations and the role they play in proppant transport, fracture initiation and subsequent proppant placement. Pioneering hydraulic fracturing technology research was undertaken in the 1980’s by the DOE/GRI and Mitchell Energy that led to the dramatic implementation of this completion technology and diagnostics throughout the late 1990’s. With the increasing technological advancements in technology and software to analyze and design frac treatments there have been incremental advancements in treatments that has led to present day jobs that are bigger, cheaper, faster and lead to ever more increasing reserve recovery. Initially, research looked to investigate materials pumped: fluids and proppant were changed with trends in fluids looking at slickwater (friction reducer or FR) then increasingly viscous fluids (low viscosity borates), hybrids of the two and nowadays returning to modified ‘original’ fluids, the so-called High Viscosity Slickwater fluids (HVFR). Proppants have similarly undergone a circular evolution from coarse sand to conductive ceramic proppants to nowadays using the finest 100 mesh sands, otherwise known as ‘flour’ and cheaper locally sourced sands.

However, the past decade and particularly the last 5 years has been increasingly interesting for specialist perforation manufacturers, as operators have increasingly looked to optimize stimulation completions by looking to increase stage length and maximize injection rates. The effect of these on roc mechanics and particularly fracture initiation is increasingly under the spotlight. Completions have evolved from allowing single massive fracs, with a short trial with openhole technology and now increasingly modern multistage completions are use ‘targeted’ plug-and-perf technology. The advantage of the plug-and-perf technology is that it allows more effective stimulation of specific zones and technology is evolving to allow for ever increasing stages, with initial wells targeting 5-10 stages of 5 perforation clusters but more recent completions looking to target 30-60 stages with 15 to 20 perforation clusters.

All companies are now operating in a low-price market where there is a premium paid for new technology. Therefore, manufacturers are constantly looking to innovate their completion technology offerings and GEODynamics is the leading innovator in plug-and-perf technology. GEODyamics’ technology was originally pioneered around its CONNEX Clean Perforation Technology (CPT), shown in Figure 1.

Perforations had long been assumed to just be tunnels that connect the wellbore to the reservoir and it was assumed that bigger deeper penetration would be better. However, as rates for stimulation treatments have increased the importance of incremental improvements in lowering friction due to perforations and the effect that has on fracture initiation and growth has become apparent. CONNEX is the leading technology that showed the importance of a Clean Perforation tunnels (CPT) for effectively allowing treatment initiation, the so-called ‘low breakdown pressure’. However, companies such as GEODynamics realized that they would soon need an array of perforations and specialized completion technology to be able to effectively undertake plug-and-perf operations at ever increasing rates in ever more diverse Unconventional assets (UNCON’s). Proactively, GEODynamics went back to the drawing board and consulted with hydraulic fracturing experts to determine the wish list for ideal perforation design. Overwhelmingly, Stimulation experts look for two main things from their perforations:

GEODynamics answer to resolve the perforation conundrum was to completely redesign the perforation charge which resulted in their Consistent, Equal Entry Hole, Limited Penetration (CLPT) charge – FracIQ. Other perforation manufacturers have developed similar technology by adapting their standard deep penetrating (DP) charges but FracIQ is unique in that it has been completely redesigned to also give equal holes and limited penetration. Further to this, the most recent product in the GEODynamics perforation development is a Planar, Consistent, Equal, Limited Penetration (PCLPT) perforation product line, HellFIRE. This perforation has been designed based on several factors: short length, safety and flexibility as described in the rest of this article.

Conventional perforating systems deliver unequal hole sizes in horizontal wells, due to the gun lying on the low side of the well, see Figure 2. This means that it is necessary to use ‘averages’ to calculate perforation friction, and the larger holes are on the downside which initially preferentially injects fluids downwards. However, by integrating the technology of GEODynamics’ FracIQ CLP technology, the HELLFire (PCLPT) system offers equal holes with a high degree of consistency that provides for highly accurate calculations of the perforation friction used in perforating operations, where every hole size and every cluster are guaranteed to be cleaned and the same. This consistency, together with the limited penetration means that starting the job (fracture initiation) is easier and any subsequent analyses is more accurate. Ultimately this technology allows for better optimization of inter-stage frac placements and increased reserve recovery.

The gun was designed to be just over 9.5 inches in total length, meaning that the system is roughly half the length of a conventional perforating gun. By minimizing the tool string length, the HELLFire (PCLPT) system allows plug-and-perf engineering teams to reduce cluster spacing to 10 feet or less. Completion Engineers are now able to achieve more clusters per stage in fewer stages. By increasing the cluster count per stage, many of the problems due to formation variations are mitigated, leading to better overall completions where geometric completions are used. Operationally, as a result of the shorter length the HELLFire system doubles the capacity of a standard perforation set-up and a standard string containing up to 35 clusters is able to fit in the standard lubricators used with a small crane.

The use of the standard Spiral FracIQ and Planar HELLFire perforations (see Figure 3) now enables operators to clarify the required cluster phasing and spacing for more effective frac placement. For more transverse frac growth perhaps tighter, planer perforation clusters (HELLFire) are required or where growth is more longitudinal growth along the wellbore, FracIQ may be more beneficial. The ability to change and apply the GEODynamics Perforation ToolboxSM will allow for stages to be designed with optimal cluster spacing and enhanced perforating efficiency, both on the plane and along the axis of the wellbore. Better definition of the cluster spacing involved in a frac job will help asset teams improve the design process, optimize stimulation treatments and better target reserves – ultimately making better wells. 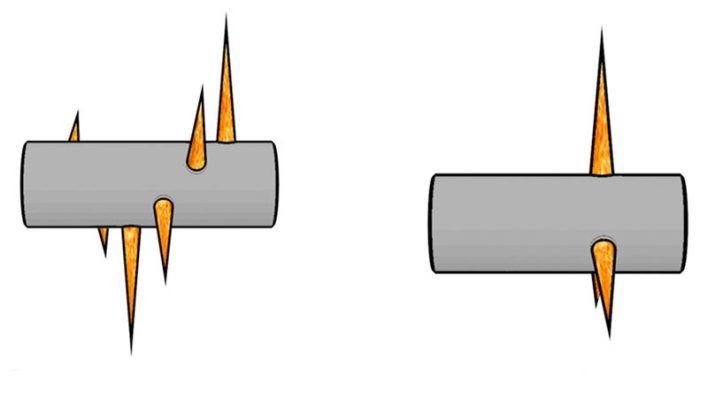 Extensive field trails are required for the new products as operators pump at ever higher pressures and push the boundaries to the limits of what is possible to effectively stimulate as much reservoir as possible. Prior to being commercialized wireline providers have run tests with more than 7,000 clusters of the new HELLFire PCLP system and have demonstrated that the design gives operators and service companies a safe and reliable option in their desire to construct better wells. Additionally, as manufacturers are increasingly looking to improve consistency (QA/QC) and on site perforation safety factory-loaded system are on the increase. The advantage of the HELLFire system is that as it is a bespoke system for wireline and slickline conveyance it offers improved convenience, safety and reliability, whether run with addressable initiators or with tried-and-trusted pressure switches. The system is also the only PCLPT system on the market that offers the flexibility to be run as a 1-shot 00, 2-shot 0-1800, 3-shot (1200) or 6-shot (600) system; using either a single or double gun system.

The future is increasingly looking at resolving the issues about proppant transport, treating fluid distribution and frac placement. The important role of role perforation placement and configuration in each stage in resolving and clarifying the requirements for completion design is at the cutting edge of hydraulic fracturing technology, see Figure 4.

Perhaps GEODynamics Phil SNIDER best sums up the recent advances best with his quote from several years ago ‘Limited-Entry Plug/Perf Systems will rapidly evolve in the next 3 years as much as they did in the last 30 years’, if anything he understated the advances that have occurred in the 3 years since. What is clear is that the GEODynamics perforation development program, with products such as CONNEX (CPT), FracIQ (CLPT) and now the recent HELLFire (PCLPT) system is a leading example of technological innovation and downsizing of perforating gun technology which will create new possibilities for perforating engineers and wireline operators to engineer better wells and maximize reserve recovery.