Four and a half years after the inauguration of construction works in Thessaloniki, the Trans Adriatic Pipeline (TAP), an 878-km gas transportation system crossing Greece, Albania, the Adriatic Sea, and Italy, began commercial operations. A diverse team of industry professionals worked diligently and effectively under challenging conditions to safely deliver a strategic piece of energy infrastructure on schedule.

TAP is the European leg of the Southern Gas Corridor, a gateway project that will transport 10 billion cubic metres (bcm/a) of new gas supplies from Azerbaijan to multiple markets in Europe. The TAP system operates in line with internationally recognised quality, health, safety, and environmental standards, and is designed with the potential to double its throughput capacity to 20 bcm/a.

“Today, a long-term vision has become a reality! I am extremely proud of this achievement, made possible –first and foremost– thanks to the dedication and commitment of our people and everyone involved, the solid trust and unwavering support of our shareholders, all governments in the value chain and the European Union, as well as the suppliers and contractors that worked on the project. As a new transmission system operator, developed and built in compliance with best industry practices and standards, TAP enables double diversification: a new, reliable and sustainable energy route and source of gas reaching millions of European end-users, for decades to come,” Luca Schieppati, TAP’s Managing Director, commented. 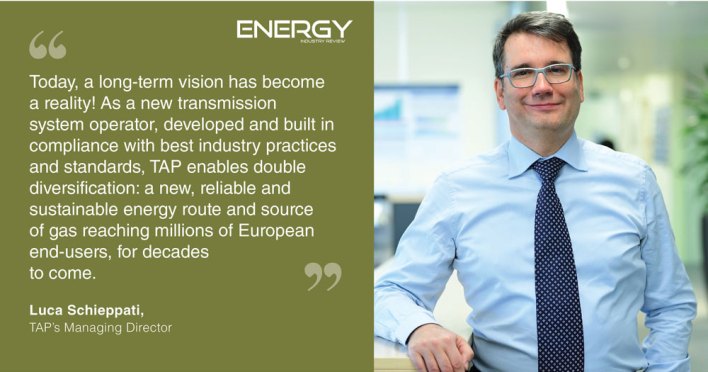 “Southern Gas Corridor is the pioneering carrier of natural gas from Azerbaijan to Europe and one of the most modern and reliable systems currently available for transporting energy. As a key component of the 3,500km Southern Gas Corridor, TAP combines strategic and market competitive features. It ensures that Europe can receive supplies from yet another source, while supporting the key EU objectives of achieving an integrated energy market, and a sustainable, secure and diversified energy mix, contributing to ongoing streams towards clean energy transition,” Murad Heydarov, Chairman of TAP’s Board of Directors, added.

After almost four and a half years since the start of construction, the Trans Adriatic Pipeline (TAP) is substantially complete. The TAP pipeline has been filled with natural gas from the Greek-Turkish border up to the pipeline receiving terminal in Southern Italy.

The Trans Adriatic Pipeline (TAP) AG started to introduce the first natural gas into a 2 km section of the pipeline in Greece between the Evros river and the Kipoi compressor station last November. This is the initial stage of the pipeline commissioning process, which aims to ensure that the infrastructure is entirely safe and ready for operations after the completion of the process, in line with national and international safety and operational standards.

Introducing gas into the pipeline system is another milestone towards the start of Shah Deniz 2 gas deliveries to Europe. Commercial gas flows through TAP were being planned to start in October 2020 when the complete asset all the way to Italy was expected to be commissioned and tested.

Following the commissioning of the first section, gas will continue to be gradually introduced into other sections of the Greek pipeline and beyond in Albania and Italy in the upcoming months. Connecting with the Trans Anatolian Pipeline (TANAP) at Greece’s border with Turkey, TAP stretches across northern Greece, Albania, and the Adriatic Sea before reaching Italy’s coast.

TAP is part of the Southern Gas Corridor, which also comprises the South Caucasus Pipeline (SCP) crossing Azerbaijan and Georgia, and TANAP.

TAP’s first offshore pipelines (7km) in Albania were successfully installed and backfilled in May. This is part of the 105 km section across the Adriatic Sea that will link the gas pipeline to Italy’s transmission network.

The 878km long pipeline will connect with the Trans Anatolian Pipeline (TANAP) at the Turkish-Greek border at Kipoi, cross northern Greece, Albania and the Adriatic Sea, before coming ashore in Southern Italy, where it will connect to Italy’s gas transportation grid operated by Snam Rete Gas.

TAP is the European section of the Southern Gas Corridor, enhancing Europe’s energy security and contributing to decarbonisation and the diversification of gas supplies.

TAP’s shareholders have passed the resolution on the development and construction of the project at the end of 2013.