Turkey in August announced the discovery of deposits evaluated at 320 billion cubic meters of gas in the Black Sea, not far from Neptun Block, located in the Romanian territorial waters. President Recep Tayyip Erdogan was quick to declare that his country wanted to start using these resources since 2023 and become a net energy exporter. While Turkey joins the race for the exploitation of the offshore field excited and hopeful, in Romania the amendment of the Offshore Law, insistently requested by investors, and the establishment of a stimulating and predictable fiscal framework will remain at the stage of promises at least until after the parliamentary elections.

The site where gas was discovered is Tuna-1 block, located approximately 150 kilometres off the Turkish coast, at the intersection between the maritime borders of Bulgaria and Romania with the territorial waters of Turkey and close to the Neptune block in Romania. Turkey’s ambitions don’t stop here, the Energy Minister saying that another area was also considered, with an area of 6,000 sq km. “The evaluation of our experts is that we may see similar structures there too,” Turkey’s Energy Minister has stated. Despite the enthusiasm of Turkish officials, international analysts remain skeptical of this discovery, claiming that, although the value of the gas field is noteworthy, the finding is not significant enough to remedy Turkey’s financial situation or to turn it into a regional energy hub.

Turkey’s Central Bank has spent tens of billions of dollars from its foreign currency reserves to support the Turkish lira this year, but despite these efforts the local currency continued to depreciate in relation to the US dollar, writes Turkish website ahvalnews.com, quoting a number of analysts. On the other hand, a lending boom recorded by state-controlled banks in Turkey fed the demand for imports and increased the country’s current account deficit.

A slowdown of foreign investments, combined with the decrease in revenues from tourism, leaves Turkey with little funds available to finance its deficit, which leads to increased concerns for the financial and economic instability of the country. Under these circumstances, the economic analysts are skeptical of the statement that the discovery of the gas field would eliminate Turkey’s current account deficit.

Although authorities claim that production will start as early as 2023, the centenary of the Republic, the capitalization of offshore fields is technically difficult and expensive.

With the low hydrocarbon prices, the return on investment could take place slow. Demand on the internal market in Turkey has been in decline in the past two years, and volumes coming from domestic sources will face competition from importers, including cheap liquefied natural gas (LNG). The same is true for EastMed gas, if an agreement is reached for its extraction.

Challenges for the major suppliers

Economic analysts claim that the new discovery will make the Turkish gas market more competitive and create challenges for suppliers.

“Azerbaijan is safe for now, but Russia and Iran could lose volumes to the new find and to LNG imports, which have also grown. Finally, some of the gas could be exported to neighbours such as Bulgaria, Serbia and Romania, again providing competition for Russian gas,” believes Robin Mills, chief executive of energy consultancy Qamar Energy, quoted by thenational.ae. It could prove too expensive to be sold.

However, the Black Sea discovery will make a difference. In the following five years, Turkey will renegotiate long-term contracts with the important suppliers. The list includes offers signed with Gazprom for the so-called Western route, currently served by TurkStream pipeline, as well as for Blue Stream, writes aljazeera.com.

Turkey consumed 45bcm of gas in 2019, falling from around 50-55bcm several years before, and the bill of energy imports was USD 41bn last year.

2023, a too optimistic deadline

The deadline provided by Ankara for starting exploitation, 2023, is rather optimistic than realistic.

“Turkey is in the phase of geological investigation. After the reserves are confirmed, they will move to the development phase, which means making available the exploitation and transmission facilities. From the moment of field discovery to that of bringing it online years will pass,” explains Nicolae Turdean, President of the National Agency for Mineral Resources (NAMR).

Russia and Iran, the first to lose

Historically speaking, the largest gas supplier of Turkey is Russia, imports from this country accounting for more than half of the gas volume entering the country. Next are imports from Iran, Azerbaijan, Algeria, Qatar etc.

In the first half of this year, Russian and Iranian gas imports fell however by over 40%, Azerbaijan becoming the largest exporter on the Turkish market, covering almost a quarter of total gas imports. In the same period, LNG imports climbed by almost 45%, Algeria and Qatar covering approximately half of these imports, according to an analysis by aljazeera.com.

After the new discovery, Turkey’s domestic production promises to reduce the dependence on foreign suppliers and, possibly, lay the foundations of exports to the EU markets.

Erdogan’s announcement comes at a time when Turkey is blocked in a dispute on maritime borders and access to offshore hydrocarbon deposits in eastern Mediterranean.

The agreement signed with Government of National Accord (GNA) in Libya to delineate exclusive economic zones (EEZ) led to a boost for Greece, Cyprus, Egypt, Israel and, lately, France. Tensions in the Mediterranean Sea increase after Greek and Turkish vessels collided in August. Recently, the air forces of Greece and United Arab Emirates (UAE) have organized their first common exercise, south to the Crete island, while Turkey organized its own military exercise. Aljazeera.com analysts note that both Greece and Turkey would rather avoid a dangerous escalation and, ultimately, return to the table of negotiations, but for now neither country wants to take a step back.

Should Erdogan choose to reduce pressure by freezing the exploratory activities in the disputed waters around Cyprus or off the Greek island of Kastellorizo, the new Black Sea discovery would be a reason to deviate the domestic attention.

Unlike the EastMed, the territorial waters of the Black Sea are not disputed in general, except for Crimea, of course, after the annexation by Russia in 2014.

Gas discovery is also seen in Turkey as positive news at a time when the Turkish economy is struggling. After a recovery in 2019, the economy was strongly hit due to the COVID-19 pandemic. The IMF and World Bank are expecting the Gross Domestic Product (GDP) to fall by 3.8-5% this year, for the first time since 2009. Turkish lira lost a fifth in value compared to the US dollar since January. There will be a modest recovery in 2021, but the golden days when the ruling Justice and Development Party (AKP) gained support following a solid economic growth and improvement of the standard of living are gone. 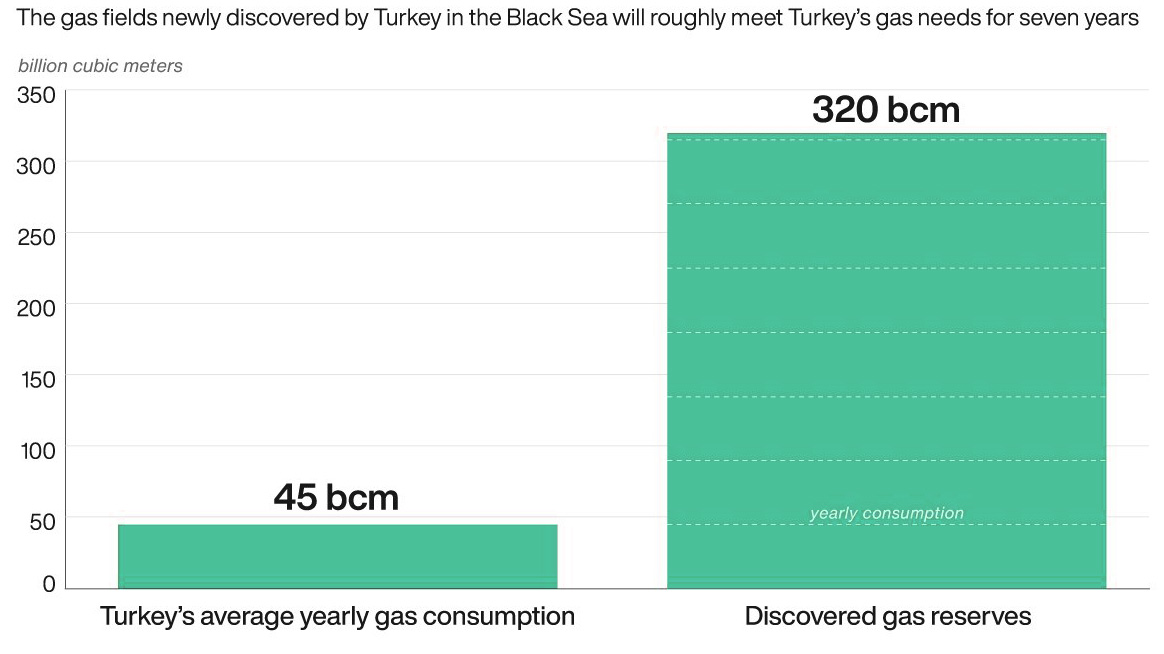 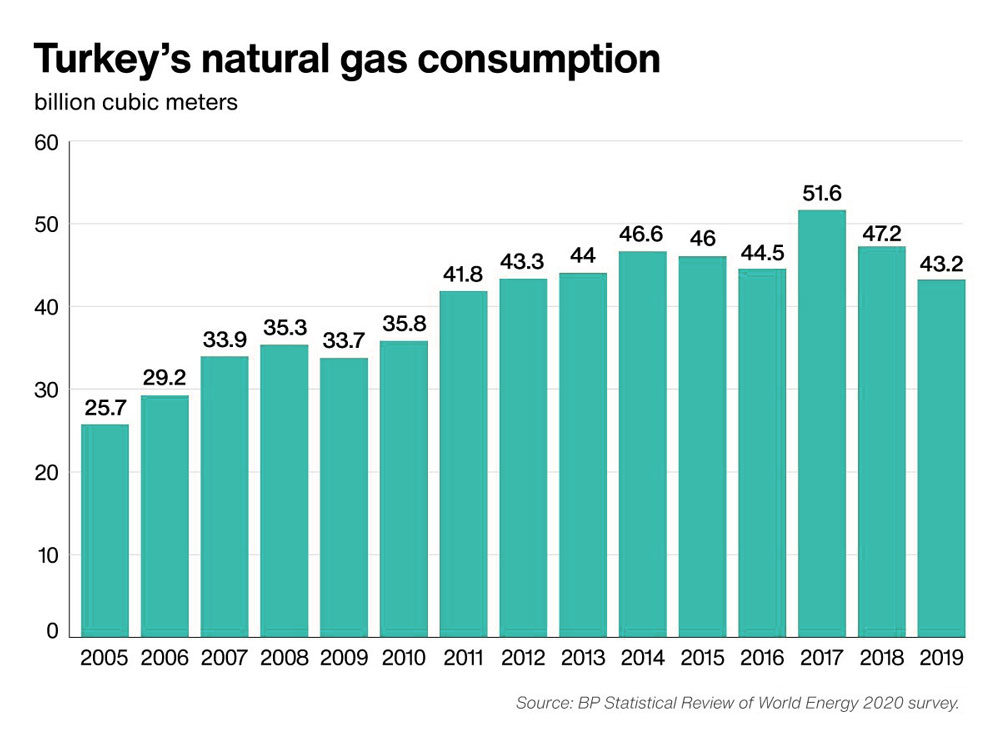 Romania is not affected

Turkey’s discovery does not affect Romania at this point.

The entire Europe is supplied mostly with Russian gas, and diversification of supply sources is essential in the European Union’s strategy. “Romania must solve its legislative problems, and I refer to the Offshore Law, and start Black Sea gas exploitation. We have a consumption of 14-15bcm of gas and we came to produce 10.5bcm. Under these circumstances, the exploitation of the field discovered by OMV Petrom and ExxonMobil would ensure the consumption of the domestic market for 8-9 years,” NAMR President also pointed out.

The European Green Deal of the European Union sets the most ambitious antipollution targets in history. The document shows that the European executive wants the EU to become by 2050 neutral in terms of greenhouse gas emissions and also by 2050 the economic growth to be decoupled from the use of fossil fuels. The reduction of the carbon footprint by 2030 with an outlook to 2050 aims not only at coal exploitation, but also the exploitation of other deposits, including natural gas. From this perspective, it would mean imposing restrictions in exploitation, which would make some fields uninteresting. But, for Romania, this is a major risk which, financially, it cannot afford.

Instead of conclusion: Legislation blocks investments

Eight years ago, in Neptun Block, in Romania’s Black Sea territorial waters, the largest gas discovery was announced, a field estimated at 42-84 billion cubic meters of gas. Companies OMV Petrom and ExxonMobil, which hold equal shares in Neptun project, have so far postponed the start of investments, accusing a legal framework inadequate for investments of such scale. Finally, the US company ExxonMobil last year announced that it wanted to withdraw from this project and sell its stake. Several companies have shown interest in taking over this stake, but things are still far from being settled.

This year, amid the coronavirus pandemic and the economic crisis triggered by it, discussions on selling ExxonMobil’s stake stagnated.