The ongoing COVID-19 pandemic has hit the industries hard, but perhaps the one industry which has taken the biggest hit is the global oil and gas industry. This situation has forced many oil and gas companies to either stop or slow down their operations, which has impacted production in both upstream and downstream operations. Despite decreasing production and fluctuating consumption through the years, crude oil and petroleum products remain the largest contributors to energy consumption.

Even in the case of the expected increase in renewable energy sources, the planet will continue to face a major rise in temperature, according to a study by BloombergNEF (BNEF). According to authors, the global warming by 3.3 degrees Celsius by 2100 would result in a massive risk of irreversible change of climate models. The necessary investments until 2050 to avoid this scenario were estimated at USD 130,000 billion.

The stark drop in energy demand due to the coronavirus pandemic will remove some 2.5 years’ worth of energy sector emissions between now and 2050, according to research company BloombergNEF’s (BNEF) latest New Energy Outlook 2020 (NEO 2020). 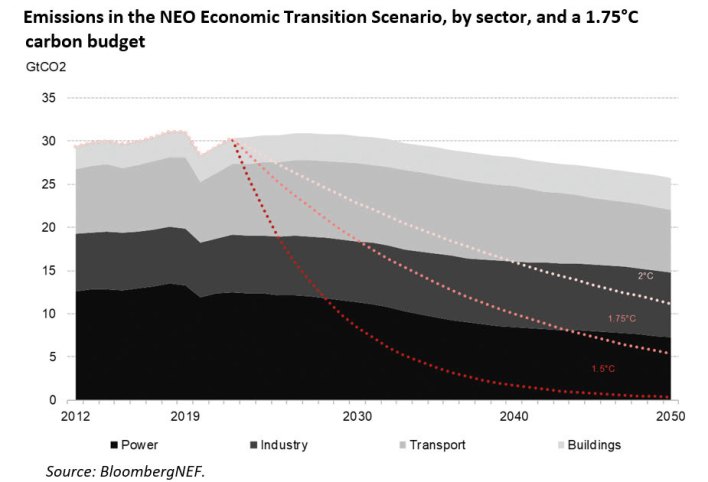 BNEF’s latest projection of the evolution of the global energy system over the next 30 years, using its proprietary Economic Transition Scenario, shows that emissions from fuel combustion peaked in 2019. Down approximately 8% in 2020 as a result of the Covid-19 pandemic, energy emissions rise again with economic recovery, but never again reach 2019 levels. From 2027 on, they fall at a rate of 0.7% per year to 2050.

The crisis generated by the Coronavirus will reduce emissions in the energy sector with the equivalent of a volume emitted in two years and a half if the pandemic did not exist, the quoted study shows.

Emissions should be reduced by 6% every year to remain way below a rise in global temperature by two degrees.

“To stay well below two degrees of global temperature rise, we would need to reduce emissions by 6% every year starting now, and to limit the warming to 1.5 degrees C, emissions would have to fall by 10% per year,” claims Matthias Kimmel, co-author of the BNEF report.

The New Energy Outlook 2020 offers the estimate of USD 78 trillion to USD 130 trillion of additional investment needed by 2050 to prevent the catastrophic scenario and reduce the rise in global temperature to well under two degrees Celsius, the basic target stipulated in the Paris Agreement. Current energy and climate policy and investment plans are leading to a 3.3-degree rise, the study found.

The difference is calculated against average temperatures from preindustrial times.

Wind and solar power, among the key factors in the energy transition

The next ten years will be crucial, according to the CEO of BNEF Jon Moore. Acceleration is necessary especially in the installation of wind and solar power plants, electric vehicles, small-scale renewable energy sources and heating technology with low carbon emissions, such as heat pumps and the development of fuels with zero carbon emissions, he says.

In this context, the report highlights hydrogen in particular.

Wind and solar power will cover 56% of the global electricity production by mid-century and together with energy storage batteries take 80% of the USD 15,100 billion to be invested in new power capacity.

Oil demand will peak in 2035 and then start to fall, especially due to an increase in the number of electric cars, according to BNEF calculations.

Natural gas will be the only fossil fuel that will continue to grow by 2050, by 0.5% y/y, especially because of consumption in buildings and industry.

Regarding coal demand, data show that it reached its peak in 2018, its share in the primary energy consumption following to fall to 18%, compared to the current level of 26%.

Global warming projection of 3.3 degrees is no surprise

Associate Professor Vladimir Đurđević from the Faculty of Physics in Belgrade said global warming above two degrees would boost risks of a great economic loss and different points of no return in the climate system. He told Balkan Green Energy News that the world would undergo “a dramatic transformation and face extreme weather and climate events.”

However, he said that the 3.3-degree estimate is no surprise. Global warming projections for 2100 have weakened by between half a degree and one degree Celsius in the past years according to changes in energy and climate policy, which is only limited progress, he stressed.

“Our projections for the power system have become even more bullish for renewables than in previous years, based purely on cost dynamics. What this year’s study highlights is the tremendous opportunity for low-carbon power to help decarbonize transport, buildings and industry – both through direct electrification and via green hydrogen,” Seb Henbest, chief economist at BNEF and lead author of NEO 2020, said.

NEO 2020 sees total oil demand peaking in 2035 and then falling 0.7% year-on-year to return to 2018 levels in 2050. Electric vehicles are projected to reach upfront price parity with internal combustion vehicles in the years leading up to the mid-2020s. After that their adoption accelerates, eating more and more into the oil demand growth that otherwise comes from aviation, shipping and petrochemicals.

Ultimately, energy use in buildings, industry, and certain parts of the transport sector, such as aviation and shipping, have few cost-competitive low-carbon options, and so remain heavily reliant on gas and petroleum products. For decades, crude oil and petroleum products have had the largest share in gross inland energy consumption in the EU.