bp is planning a new large-scale green hydrogen production facility in the North-East of England that could deliver up to 500Mwe (megawatt electrical input) of hydrogen production ‎by 2030. To be developed in multiple stages, HyGreen Teesside is expected to match production to demand ‎and build on experience to drive down costs.

bp is aiming to start production by 2025, with an initial ‎phase of some 60MWe of installed hydrogen production capacity. A final investment decision on the ‎project is expected in 2023.‎

bp is working with industry, local administration such as Tees Valley Combined Authority (TVCA) ‎and the UK government to increase the pace of decarbonization in transport.

bp’s blue and green hydrogen projects in Teesside, together with the proposed Net Zero Teesside ‎power project, is expected to further support economic development and regeneration in Teesside. ‎Creating high-quality jobs in both construction and operation phases, the projects will support local ‎education, skills development, and the development catalyse a highly skilled UK-based hydrogen ‎supply chain.‎

HyGreen Teesside is expected to fuel the development of Teesside into the UK’s first major hydrogen ‎transport hub, leading the way for large-scale decarbonization of heavy transport, airports, ports, and ‎rail in the UK.

“Low carbon ‎hydrogen will be essential in decarbonizing hard-to-abate industrial sectors including heavy transport. ‎Together, HyGreen and H2Teesside can help transform Teesside into the UK’s green heart, ‎strengthening its people, communities, and businesses. This is exactly the type of energy we want to ‎create and more importantly deliver,” Louise Jacobsen Plutt, senior vice president for hydrogen and CCUS, bp, said.

Transport Secretary Grant Shapps added: ‎“This exciting project builds on our ongoing development of ‎hydrogen in the area through the Tees Valley Hydrogen Transport Hub. It’ll help pave the way for its ‎use across all transport modes, creating high-quality, green jobs in the process.‎ This is excellent news following the recent COP26 summit and I look forward to supporting industry ‎to develop new technologies as we build a cleaner transport system and work towards a net-zero ‎future.”‎

The combined 1.5GW capacity of HyGreen Teesside and H2Teesside could deliver 30% of the UK ‎government’s target of developing 5GW of hydrogen production by 2030. Industries in Teesside ‎account for over 5% of the UK’s industrial emissions and the region is home to five of the country’s ‎top 25 emitters.

“This is yet another coup for the region as we lead the UK in ‎creating the cleaner, safer and healthier jobs and communities of the future. We’re quickly becoming ‎the go-to place for innovation in the hydrogen sector, thanks to our status as the UK’s first Hydrogen ‎Transport Hub and bp’s commitment with other schemes, such as Net Zero Teesside and ‎H2Teesside. Whether it’s hydrogen, carbon capture, utilization and storage or offshore wind, ‎Teesside, Darlington, and Hartlepool has the know-how, sites, and ambition to deliver,” Tees Valley Mayor Ben Houchen noted.

bp has already announced a series of Memoranda of Understanding (MoU) with potential industrial ‎customers for hydrogen in the Teesside area, including both existing and planned operations, as it ‎grows demand for the hydrogen expected to be produced by H2Teesside. bp has also recently ‎signed an MoU with Daimler Truck to pilot both the development of hydrogen infrastructure and the ‎introduction of hydrogen-powered fuel-cell trucks in the UK.‎

In bp’s wider low carbon business, it has built a strong renewables pipeline of 23.3GW, strengthening ‎confidence in its 2025 target of delivering 20GW of developed renewables to FID. 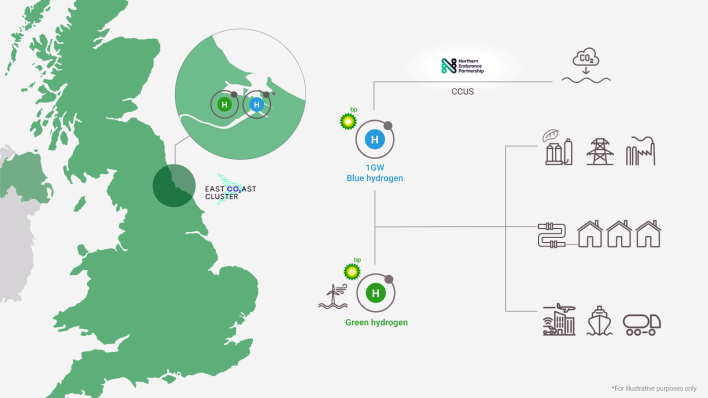 The Hydrogen Transport Hub will be a living lab (drawing upon the UK’s national pool of science and technology talent) of regional, national, and international significance that acts as a catalyst for the fulfilment of green hydrogen’s role in decarbonising transport across modes. This will establish the region as an exemplar in the development of education, training and skilled employment surrounding green technology that builds upon industrial heritage and which contributes to inclusive green growth and positioning the UK as a global leader in energy transition.

The driving motivation for the Hub is to provide R&D Research & Development facilities and opportunities to enable an early understanding of what the challenges of hydrogen for multimodal transport may be. The Hub facility and its living lab operations will provide the primary evidence to inform the DfT’s strategies and policy on hydrogen moving forwards and confirm its role in supporting the decarbonisation of the transport sector.

H2Teesside is bp’s world-scale hydrogen project that aims to produce 1GW of CCUS-enabled blue hydrogen and start-up in 2027. It will capture and send for storage up to 2 million tonnes of carbon dioxide (CO2) per year via the Northern Endurance Partnership (NEP) – equivalent to capturing the emissions from the heating of one million UK households.

Teesside has all the attributes of a world-class low carbon hydrogen hub – the right natural resources, concentrated demand, hydrogen storage and pipelines, ample access to CCUS, and people with the skills that bp needs.