Greece is strategically located at the edge of Europe, facing toward the East and the South, with strong (and not always friendly) ties with Asia and African counties. Its place, right at the crossroads of continent, combined with the strategic alliances Greece has forged with Cyprus, Israel (and the recent close collaboration with Egypt) it now has opportunity to play a key role in several regional energy markets, like the one of the Balkans or the immensely important one of South-East Mediterranean.

Greece has been emerging as a key player in the transportation of energy from East to West through pipeline projects, electricity grid interconnectivity and alternative means of ensuring security of supply through offshore reserves.

Greece’s energy system has been plagued by multiple factors, but it is undergoing significant transformation. A main characteristic of today is the effort to decrease consumption of conventional (fossil) fuels, like lignite. Greece strategically chose to invest in lignite and consider it foundational for its energy mix, after the oil crisis of the 70s. There is still significant dependency on the imports of crude oil (and other oil products) along with natural gas. Over the last years we have been seeing increasing penetration of natural gas into the energy mix of Greece although its share of the pie is still small and far less than the European standards.

Greece is actively pursuing convergence with the European standards, employing national policies like the introduction of the CO2 tax. The energy sector in this country has a higher contribution to gross value added most EU countries and it the projections indicate further expansion due to a number of factors.

Kyriakos Mitsotakis, the prime minister of Greece, has brought forth a national plan aiming at shifting “the country’s economic and institutional paradigm” with the objective to modernize and render them more efficient.

The Greek recovery strategy (referring to recovering from the Covid impacts) which is in accordance with the EU recovery principles agreed in July, counts on deep reformational efforts suggested and enforced by the Mitsotakis administration since its election in July 2019.

The endgame of many of those policies have a 2030 energy and climate plan epicentre; it focusses on phasing out of fossil fuels by 2028 along with the adoption of a new, digital RES licensing regime. The four pillars of the recovery plan suggest:

The Greek energy sector is undergoing a major transformation, pursuing moving away from its reliance on lignite (up to a fifth of its energy production in 2019) to renewable energy sources and less carbon intensive gas generating units. The aim at achieving reduction in greenhouse gas emissions by more than 55% by 2030 through:

The Greek recovery program includes plans for up to 1.38 GW of hydro and battery storage, with a dedicated team working on energy storage regulation framework this year. Smart energy systems and further PV installations are also significant aspects of the program. Commercial vehicle infrastructure will also be moving toward electric vehicles, a move financed (or at least supported by state funds); there are also plans to expand a national EV charging network to support the move towards EVs. The partly operational electricity interconnector between the mainland and the Cyclades complex of islands will also be expanded.

The country’s move towards a more sustainable energy future and the subsequent fundamental transformations will have challenges and some great implications:

Major Greek private corporations are leading the way with RES projects across Greece (and not only); such companies are GEK Terna, Mytilineos Group and HELPE among others.

The government recently approved four new major investment projects in electricity production from renewable energy sources with a total budget of 2.02 billion euros. The projects that the Ministerial Committee for Strategic Investments approved have a combined amount of 2,810.3 megawatts.

One of the first projects concerns major photovoltaic parks bearing capacity of 1.5 gigawatts in 12 regional units, to be constructed by the Egnatia Group with a budget of €888.14 million. GEK Terna Energy is responsible for another project, concerning the development of 18 wind parks with a capacity of 360 MW on the island of Evia, with a budget of €585 million.

The third project is aiming at the establishment of five wind power investments of €121.28 million in total, with a combined capacity of 120.3 MW in Thrace, on the north-eastern part of Greece.

Another significant initiative is that one led by Karatzis SA – the construction and operation of 37 photovoltaic stations of 830 MW in total in Larissa, Magnesia and Kilkis with an estimated budget of €421.6 million.

Of course, the challenges related to such transformations are always ample; one of the leading ministers of the Greek government mentioned: “There has recently been some criticism, both within and outside of Parliament, of the Energy Ministry’s financial and structural interventions, especially in projects of strategic significance; the answer today comes from the investors themselves, who continue to have a very strong interest in investing. The answer also came recently, from US Energy Secretary Dan Brouillette, who underscored the investment-friendly character of our policy and noted the similar interest of UAS investors”. Kostis Hatzidakis, the same minister, went on with the number of applications for new RES projects in the last invitation for expressions of.

Another major initiative is that of the Greek public electricity giant (not necessarily the good type of giant), PPC and German (somewhat) equivalent RWE which are expected to sign for the joint development of renewable energy source projects in Greece. The agreement provides for RWE and the Greek Public Power Corporation to launch a commonly supported project, with stakes of 51% and 49% respectively, and reach a total combined capacity of 1 gigawatt each within the next 5 years. PPC will contribute with licensed projects and RWE will accordingly contribute licensed projects domestically. The key is to develop the first projects early next year, the region of West Macedonia in Greece being prioritized as a prime location. 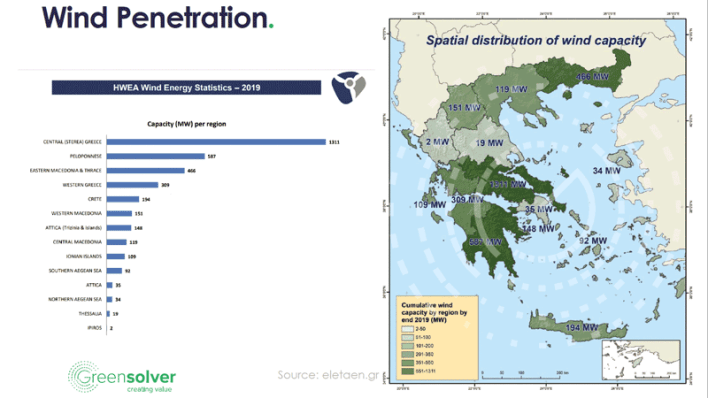 The epitome of such a project, located in Kozani (Western Macedonia), is the Kozani solar park. Such PV modules harness the energy of the sun from both sides (front and back) of the module. This characteristic renders them much more efficient, and thus more energy/electricity can be generated much more efficiently.

The idea was not a new one, but it’s a recent technological advancement developed and proved to be not only more efficient, but also less expensive. These modules can also harness reflected and diffused light achieving additional yield of up to 10% compared to conventional ones.

The Kozani park, reaches up to 5% of additional yield. The project has reached key milestones achievement becoming one of Europe’s biggest bifacial solar parks. After breaking ground on the project site with racks and frames, Juwi Hellas installed the first rows of photovoltaic modules at the park in hundreds of thousands more following.

Takis Sarris, managing director of the Greek juwi stated: “Solar energy is already the cheapest form of electricity generation in Greece. The technology with bifacial modules reinforces this development again. In this way, we can generate more electricity in less space at even lower costs. Despite the COVID-19 pandemic and restrictions on the construction site we are still on schedule. The plant is scheduled to be connected to the grid by February 2022”. After its completion, the Kozani solar park will be handed over to Hellenic Petroleum and it will be delivering more than 300 million kWh of climate-friendly electricity a year, being capable of supplying up to 75,000 Greek households.