OMV, the international, integrated oil and gas company headquartered in Vienna, and VERBUND, Austria’s leading electricity company and one of the largest hydropower producers in Europe, have started up the largest ground-mounted photovoltaic plant in Austria and are embarking on a test period of several weeks. Construction on the plant began on July 8, 2020, and was attended by Elisabeth Köstinger, Federal Minister for Agriculture, Regions & Tourism; Stephan Pernkopf, Deputy to and representing the Governor of Lower Austria Johanna Mikl-Leitner; Rainer Seele, CEO and Chairman of the Executive Board of OMV; Johann Pleininger, Executive Board member for Upstream and Deputy Chairman of the Executive Board of OMV; Wolfgang Anzengruber, Chairman of the Management Board of VERBUND; and Michael Strugl, Deputy Chairman of VERBUND, at the OMV site in Schönkirchen-Reyersdorf, Lower Austria. Just five months later and the plant is operational.

On a 13.3-hectare (133,200 m²) compound owned by OMV, Austria’s largest ground-mounted photovoltaic plant with a PV capacity of 11.4 MWp has been built in Schönkirchen, Lower Austria. The first phase of construction of the east-west facing solar park sees 34,600 PV modules produce around 10.96 GWh of solar power, corresponding to the annual electricity consumption of some 3,400 households and saving around 8,000 metric tons of CO2. Despite supply restrictions caused by the pandemic, construction work has progressed on schedule. By the end of 2021, in the final phase of construction, another 10,400 PV modules will be added to the plant. This will increase the total capacity to 14.85 MWp, generating around 14.25 GWh. This is enough to meet the annual power demand of 4,400 households in total and will save an additional 2,400 metric tons of CO2 per year.

“It’s been an honour to observe this project right from the ground-breaking ceremony and I’m delighted that the plant is up and running after just a few months of construction. The fact that projects like this are being built in the Austria mining sector – projects that combine competitiveness and climate neutrality – is both encouraging and motivating. The energy-intensive sectors in particular require innovative, climate-friendly solutions and this plant is an important step here,” said the Federal Minister responsible for mining, Elisabeth Köstinger.

“Together with VERBUND, today we have started up the largest ground-mounted photovoltaic plant in Austria. The dedication shown by the entire project team has meant we could keep to the planned schedule despite challenging circumstances. Therefore, effective immediately, we can meet part of our energy demand with sustainable solar power. With this, we are contributing to climate targets and consistently delivering on our commitment to reduce our carbon intensity,” Rainer Seele, Chairman of the Executive Board and CEO of OMV, stated.

“We’ve delivered our joint vision for the future of energy!” said Wolfgang Anzengruber, VERBUND CEO. “In a construction period of just five months, Austria’s largest photovoltaic plant has been successfully realized by OMV and VERBUND and starts operating today. Cross-sector partnerships like this allow us to provide both economic stimulus and sustainable investments – and the current crisis should teach us that we also need to tackle the climate crisis by standing together”. 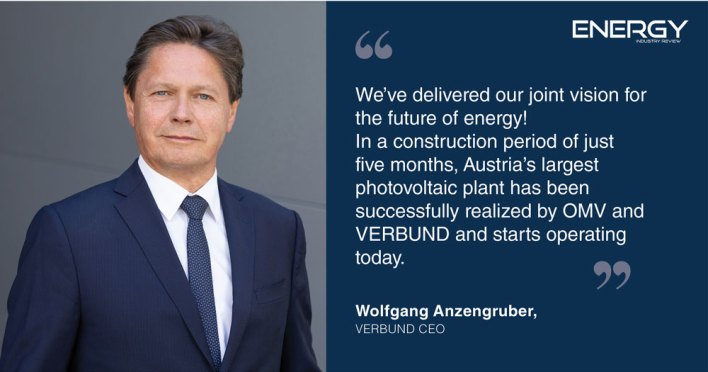 “With the largest ground-mounted photovoltaic plant in Austria, two domestic giants – OMV and VERBUND – are sending a clear signal for a sustainable energy future and themselves making a key contribution to reducing emissions. Our goal is for 100 percent of electricity in Austria to come from renewable technologies by 2030. Meeting this goal will only be possible in cooperation with Austrian companies,” Magnus Brunner, State Secretary of the Federal Ministry for Climate Action, Environment, Energy, Mobility, Innovation and Technology, mentioned.

Realization of this project also strengthens the strategic cooperation between OMV and VERBUND. This began in 2017 when OMV took a 40% stake in the e-mobility provider SMATRICS, in which VERBUND holds 40% and Siemens 20%. A joint assessment was undertaken of the refining sites in Austria and Germany to increase the quality, safety, and security of supply. In the green hydrogen sector, OMV and VERBUND are currently working together on a project called UpHy, which looks at producing hydrogen for use in road vehicles and refinery processes.