Global Energy Monitor’s ‘Boom and Bust Coal 2022’ report finds that after rising in 2020 for the first time since 2015, total coal power capacity under development declined 13% last year, from 525 gigawatts (GW) to 457 GW, a record low. 34 countries have new coal plants under consideration, down from 41 countries in January 2021.

Global coal plant capacity under development shrank 13% in 2021, according to Global Energy Monitor’s eighth annual survey of the coal plant pipeline, but steeper cuts are needed to achieve climate goals.

According to a Rystad Energy analysis, if the conflict in Ukraine continues and gets worse, coal production in Europe could increase by 11% in 2022. But, even in the context of the war in Ukraine, the European Commission insists on the need to continue the decarbonization of the energy system, to achieve the climate goals, set for 2030 and 2050, mainly reducing the greenhouse gas (GHG) emissions.

Where are the European countries in the goal of giving up coal in the context of the war in Ukraine?

The European Commission prioritizes energy efficiency, but also wants to build an energy sector that is mostly based on the ‘smart’ integration of renewable sources, while quickly distancing itself from coal and gas, for the decarbonization of the energy sector. The Transition Fund under the European Green Deal is aimed at the most economically and socially disadvantaged territories in the face of the energy transition, and in particular the coal-dependent ones. 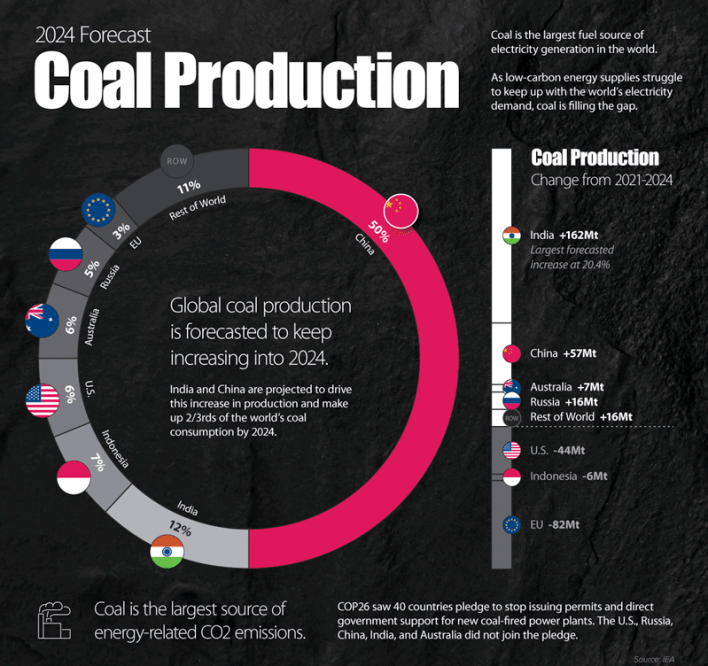 Calls to accelerate the end of coal in Europe

An analysis by Climact indicates that the European ambition of strengthening the climate goal in 2030 would lead to a decrease in coal use to 2% of EU’s energy mix (compared to 17% in 2020).

According to Ember (an energy think tank that uses data-driven insights to shift the world from coal to clean electricity), in the next decade, renewable electricity generation will almost double to deliver nearly 60% of EU electricity by 2030. This growth is driven by wind and solar, which will account for at least 40% of supply. Despite this progress, fossil fuels are still expected to generate about 25% of EU electricity by 2030, with coal power only halving over the next decade and no plan to reduce fossil gas. As a result, the EU is not on track to deliver the EU Commission’s recommended 55% reduction in total emissions by 2030. To achieve this target, progress needs to be made in seven key countries and wind and solar deployment plans must increase by a third.

The United Nations’ Intergovernmental Panel on Climate Change (IPCC) warns that if humanity continues to rely on planned and existing fossil fuel infrastructure, then we are set to face a dangerous three-degree temperature rise by mid-century.

Their most recent report released in early April 2022, entitled ‘Mitigation of Climate Change,’ found that our current emissions cutting actions are indeed having a positive impact. Nevertheless, a massive rollout in ever more powerful and efficient renewables will not be enough. Key to our remaining pathways towards successful climate action is the closure of all existing coal-fired power plants in Europe and throughout all OECD nations by 2030 while calling a halt to any planned additional coal and fossil gas infrastructure. Followed by the closure of nearly all coal-fired plants worldwide by 2040.

For several countries (Norway, Iceland, Belgium, Switzerland, Albania, Estonia, Latvia, Lithuania, and Cyprus), the report did not mention any coal-fired power plants in operation. Since the date of this report, other seven countries (22 in total) have made new announcements in this respect.

In the Czech Republic, the new government announced on January 7, 2022, that it would gradually give up coal by 2033, through a strategy to decarbonize the heating of buildings.

In Germany, former chancellor Angela Merkel had stated in April 2021 that coal phase-out was planned for 2038 at the latest, as provided in its 2019 Climate Plan. Economy and Climate Minister Robert Habeck did not exclude however the postponement of coal and nuclear power elimination, saying that “there are no taboos” in such discussions.

In France, in April 2019, the Minister for Ecological Transition presented a roadmap for closing, by 2022, the last coal-fired power plants, closure provided in the Climate Plan. It was based on a report prepared by RTE (Power Transmission Grid), which presents additional analyses on the power demand-supply balance in France during 2019-2023. Moreover, the energy-climate law provides for a cap for greenhouse gas emissions, as of January 1, 2022, for power generation facilities based on fossil fuels, which emit over 0.55 tons of CO2e per MWh. The issued decree allowed stopping two of the last four coal-fired power plants in Metropolitan France. Due to the reduced availability of the nuclear fleet with the shutdown of Chooz and Civaux reactors, a new decree was published, for an exceptional derogation from the GHG emissions cap for the two power plants operational, and then a decrease in this cap.

The UK on June 30, 2021, indicated that it planned to reach its target of shutting down coal-fired power plants in October 2024, i.e., a year ahead.

Romania will have to restart, in force majeure regime and temporarily, coal-fired power plants, this solution being aimed at achieving energy independence in the shortest possible time, Environment Minister Tanczos Barna says.

According to the National Energy Strategy, total coal production will plunge from 32 TWh in 2030 to 12 TWh in 2050, continuing the trend of diminishing coal use in the energy mix (45 TWh in 2020).

For 2030, the modelling results in the chosen Optimal Scenario show that the energy produced from coal will register a slight decrease, to 15.8 TWh, and will have a share of 20.6%.

Thermal power plants in Romania are on average 44 years old, the oldest being Paroseni, commissioned in 1964, and the newest – unit 2 of Craiova thermal power plant, in 1989. 17 coal mining exploitations are still active in the country, but some of them are in the process of being closed. The oldest coal mine in Romania, opened in Petrila in 1859, was closed in October 2015. The following should take advantage of EU’s new policy: Complexul Energetic Oltenia (company that is titleholder of the mines in Oltenia basin, plus the three lignite-fired power plants: Turceni, Rovinari and Craiova) and Complexul Energetic Hunedoara (titleholder of hard coal mines in Jiu Valley and the power plants in Deva and Paroseni). Complexul Energetic Oltenia will give up coal starting with 2026. Only three groups, totalling 1,000 MW, will be maintained as strategic reserve, until 2030. Coal-fired energy will be produced only if needed. The International Energy Agency (IEA) has published a report on the state of the world’s coal in 2021, which showed a recovery in coal consumption related to the post-Covid-19 crisis, including in Europe. The IEA has forecast a decline in coal consumption in Europe and the United States between 2021 and 2024 (through an increase in renewable energy and a return to gas), but offset by a sharp rise in Asia, mainly in China and India.

As this report was published before the conflict in Ukraine, these forecasts have become partially outdated, at least for Europe, given the consequences of the conflict on fossil fuel prices, especially gas, and on the evolution of EU Member States’ supply options.

The European Commission on March 8, 2022, announced a plan to make the EU independent from Russian fossil fuel imports way before 2030. In addition to gas, the statement highlights the importance of coal imports from Russia (which account for 45% of imports). Thus, the EC states that “following the invasion of Ukraine, the case for a rapid clean energy transition has never been stronger and clearer”.

However, in the face of a very sharp rise in the price of imported fossil fuels, coal remains a short-term alternative for several Member States and other European countries. Thus, according to the international media, the planned closure of some coal-fired power plants in Germany and the UK has already been postponed. On March 24, 2022, the German government announced the possibility of “suspending the planned shutdown of certain coal-fired power plants”.

For its part, Italy is considering whether it is necessary to use other energy sources, such as coal.

In France, the Émile-Huchet thermal power plant from Saint-Avold (Moselle), whose shut-down was initially scheduled for March 31, 2022, could exceptionally be used in the following winter as well.

On March 24, 2022, researchers at the European University Institute’s School of Transnational Governance published an analysis that identifies five key elements for understanding how the invasion of Ukraine will affect the energy transition in Europe.