The iron ore is used when the rock is rich enough to be extracted economically. Iron ore results in metallic iron (Fe) when heated in the presence of a reducing agent such as coke. The iron ore is usually composed of iron oxides and carbonates. Iron is mainly used to manufacture steel (98%), a completely recyclable material. The consumption of iron ore has remained relatively stable in the 1990s, but exploded from the steel industry growth in China, which produces 1/3 of the global steel.

In May 2021, iron was trading at over USD 230 (EUR 203) per ton on the Singapore futures market, playing with its all-time high. Then, it fell below the threshold of USD 100/ton in early November. At the beginning of 2022, it is trading at almost USD 130/ton. The Iron Market is recovering.

Increase in global iron production will slow down in the next 10 years. According to Fitch Solutions, an average of 2% is expected between 2020 and 2029, falling from 3.4% in the previous decade. The largest producers will always be Australia, Brazil, and China.

According to analysis firm Fitch Solutions, global production of iron ore is expected to register a modest growth in the following ten years. The Cabinet predicts that it will increase from over 3 billion tons this year to 3.7 billion tons in 2020, with an average growth rate of 2% (compared to 3.4% for the previous decade).

The modest growth should be determined by the expansion of mines in Brazil and the increase in production in India. The Brazilian production, of high quality and particularly appreciated by the Chinese steel manufacturers, will increase from 416 million tons to 546 million tons by 2029.

According to the agency, sent by Mining Weekly, the production in China will fall, as the low prices of the iron ore and the stricter environmental regulations force stopping the high-cost operations. In Australia, which is considered to hold the largest reserves in the world, production is expected to grow with an annual rate of 0.7%, compared to an increase by 9.2% in the previous decade.

China buys two thirds of the iron produced around the world. The bankruptcy of a giant Chinese company in full real estate boom has an impact on the entire industry. China also wants to decarbonize its steel production to reduce pollution from iron processing from coal or gas.

Since last year, Evergrande, the Chinese real estate giant, has been shaking and investors have been holding their breath. Will it fall? Will it not fall? The iron price depends on this question.

In May 2021, the iron issue has intensified, with the return on the scene of the Chinese economy, followed by the gradual recovery of the activity of the other countries that gradually came out of the Covid-19 crisis. One ton of iron ore was trading at the highest level, of USD 230 (EUR 196), on the Singapore futures market, setting a historic record. The financial failure of the Chinese group has meant difficulties for investors, and the price of iron ore has sunk as if driven by the weight of concrete. Indeed, this metal is very popular among builders. Therefore, one ton of iron ore has lost almost 60% in value since the peak of May, falling below the threshold of USD 100, to almost USD 90, a level not seen since March 2020.

The iron ore price also melted after Beijing’s decisions to limit steel production, of which Iron is a key component. The Chinese Government is therefore trying to reduce CO2 emissions from its most polluting industrial activities. 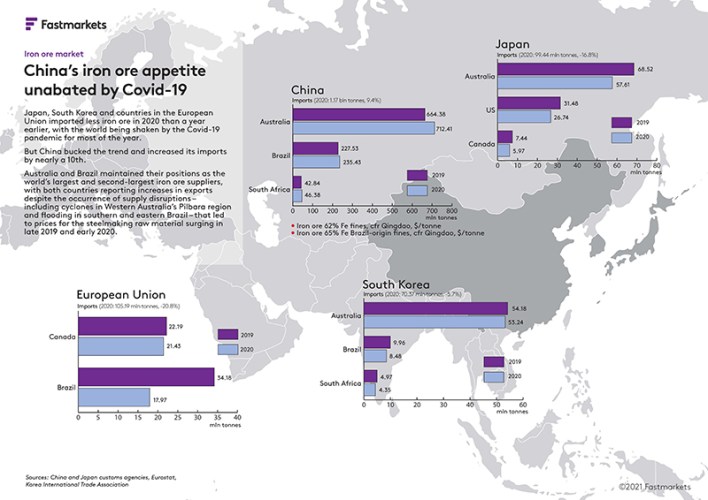 The main iron ore producing countries in the world

Much iron ore is found in sedimentary rocks called Banded Iron Formations (BIF), which date back more than 542 million years. They are present on all continents and are extracted in the form of iron ore or rocks containing iron ore. Deposits containing at least 60% Fe are often commercially viable for mining, but in some cases 56% Fe deposits have been successfully extracted commercially in different countries. While the top three largest iron ore producers are Australia, Brazil and China, African leaders include South Africa and Mauritania, while Guinea is still waiting to develop its resources.

China: is by far the largest producer, consumer, and importer of iron ore. In 2015, it produced 1.3 billion tons of iron ore equivalents, 44% of global production. In 2014, China produced 1.5 billion tons of crude ore extracted mainly in Hebei and Liaoning provinces of mainland China Other regions include Shanxi, Beijing, and parts of Inner Mongolia.

Australia: is the second largest producer of iron ore and has the world’s biggest deposits. The mineral is mainly found in the Western Australia in the regions of Pilbara, which represents 95% of Australia’s iron ore. The region forms three of the eleven biggest mining operations in the world. In 2015, Australia produced 824 million tons of iron ore.

Brazil: is the third largest global producer of iron ore, producing 428 million tons in 2015 and 411 million tons in 2014. The 2015 production accounts for 12% of the global production. Brazil has the second largest iron ore deposit in the world. The ore is mainly extracted in Minas Gerais and Para states. Carajas is the world’s biggest iron ore mine owned by Vale, Brazil’s industry giant.

India: in the past it was global leader, but now ranks fourth as the largest producer. 95% of the country’s iron ore comes from Orissa, Chhattisgarh, Jharkhand, Madhya Pradesh, Goa, and Karnataka. The largest deposits in the country are in the Orissa state. In 2015, India produced 129 million tons, similar to the 2014 figures.

Russia: the fifth largest producer in 2015 had an output of 112 million tons of crude iron ore, up from 102 million tons in 2014. Most of the county’s iron ore is in Central Russia and the rest come from Siberia and the Urals.

The largest iron ore producing countries in the world

In terms of iron ore, Romania holds few reserves, large quantities being imported. The main exploitations are located in the areas with metamorphic rocks: Poiana Rusca Mountains – 50% of the country’s production, Dognecea Mountains and Gilau Mountains, but also in areas with eruptive rocks: Harghita Mountains and Niculitel Plateau.

Today, Romania imports one million tons of concrete steel, i.e., 100% of the demand, as a result of the development of the construction segment, which recorded an 8% increase in the midst of the pandemic, while the economy fell by 4.6%.

In Romania there are two major producers of concrete steel: COS Targoviste and Ductil Steel Buzau, owned by Russia’s Invest Nikarom. At the beginning of the pandemic, in the first half of 2020, the entire quantity of concrete steel required by residential properties builders came from import. The main countries that supply concrete steel to Romania are Turkey, Greece, Bulgaria, the Republic of Moldova, and Ukraine, in this order. Ten years ago, the largest suppliers for the domestic market were companies from Turkey, Hungary, Italy, Greece, Bulgaria. In terms of price, concrete steel in Romania is by around 10-15% more expensive than the imported one, this being the case also because in Romania the energy price, which accounts for about 40% of the total cost of concrete steel, is higher than in most countries from where it is imported, respectively than in Turkey, Bulgaria, or Ukraine.

The representatives of the Metal Distributors Network (ARDIMET) claim however that local products partially offset this gap by quality, the concrete steel produced at COS Targoviste, for example, being extremely reliable and malleable and can take a variety of forms.