Specialists from IFPEN (Institut Français du Petrole et Energies Nouvelles) predict that copper’s consumption could explode by 2050, even if China has implemented a strategy since the 2000s to ensure the supply of this material, essential for many sectors of the global economy.

Due to its many properties – thermal and electrical conductivity, corrosion resistance – copper has become an essential metal in our modern societies. It is commonly used in the production of electrical cables and wires, in plumbing, in electronic equipment (printed circuits, electronic chips), in the transport sector (braking circuits, injection systems etc.), in buildings or for the manufacture of money.

Copper gains increasingly more attention as an essential material in energy transition. Low carbon technologies, mainly in the energy and transport sectors, use more copper than the traditional technologies.

A diversified area of copper resources and reserves

The US Geological Study (USGS) estimates global copper reserves to 2.1 billion metric tons, to which 3.5 billion tons undiscovered are added (average estimate) in 11 regions of the world. Around half of these resources were located in South America, the southern part of Central Asia, Asia and North America (USGS, 2014). 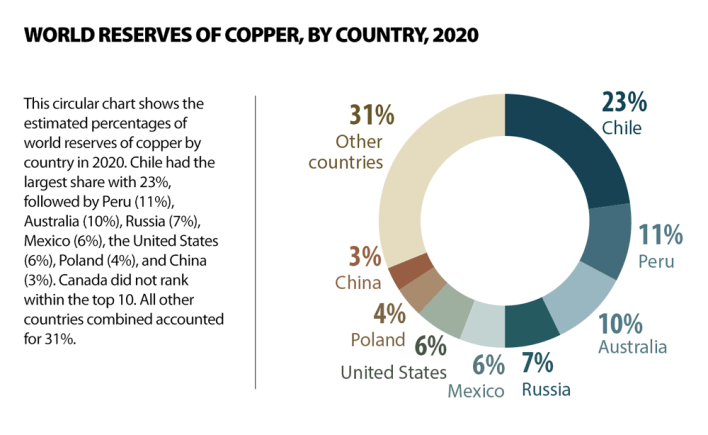 The research team used the TIAM-IFPEN model to assess the cumulative demand for copper by 2050 based on two climate scenarios: a scenario corresponding to an increase in temperature of 4°C (4D scenario) and a more ambitious climate scenario that limits the rise of temperatures to 2°C (2D scenario).

Then it applied two mobility scenarios to each of these climate scenarios: the first, a ‘Business as Usual (BAU)’ mobility, corresponds to a continuous rise in vehicle ownership; the second promotes sustainable mobility via an integrated planning and investment approach related to regional development and urban transport, and the use of public and non-motorized transport.

The model anticipates an increase in the annual demand for copper: moving from 27 Mt in 2015 to 86 Mt in 2050 and 102 Mt respectively for the 4D scenarios. Demand will mainly be determined by the electricity network, consumer goods and transport sectors.

Two indicators allow the evaluation of copper criticality and, therefore, the evaluation of the safety margin that would remain in the given term. They evaluate, on the one hand, the cumulative copper quantity extracted from mines (primary production), and, on the other hand, the quantity consumed (end-consumption) during 2010-2050 in relation to copper resources. The obtained results show strong pressure on copper resources, especially in the context of ambitious climate policies.

78.3% and 89.4% of copper reserves identified in the world will be extracted, respectively, in the 4°C and 2°C scenarios between 2010 and 2050. These extraction levels fall to 47% and 53.7% respectively, this if the undiscovered copper resources are available.

In 2018, China was the source for 9.4 million tons of refined copper, or 39% of the global total, so that it accounts for only 8% of the mining production. Therefore, China dominates to a great extent the copper refining activities.

In 2017, four of the top five copper refineries were under Chinese flag. This is a major evolution since the beginning of the 1990s, when America and Europe controlled to a great extent copper refining activities (ICSG, 2019). While China is the main metal producer in its refined form, it also remains the main consumer since 2004. In 2017, China consumed 11.8 million tons of refined copper, i.e., 50% of the total. To ensure its supply, China relies on the market – in 2017, it accounted for over 46% of global copper imports (UN Comtrade, 2017). Ensuring supply has become a major concern in the early 2000s with the implementation of an economic and trade development strategy. Known as ‘exit strategy’, it allowed it to consolidate its presence in Africa, Asia and Latin America through foreign direct investments directed mainly on the areas of infrastructure and mineral resources, or the so-called ‘Resources for infrastructures’ deals.

The New Silk Roads project, established in 2013, is a way through which Beijing can channel the raw material flow to the national territory. In July 2019, the Chinese Government estimated that 195 intergovernmental cooperation agreements had been signed with 136 states on all continents. Beijing has become the main importer of minerals and ores – iron and cooper – from South America and USD 35 billion have been invested there by the Chinese power since 2005.

Recycling, an essential element, but limited by structural factors

While between 1998 and 2015 the secondary production of refined copper recorded growth both in terms of volume and percentage, it increases much more slowly than the waste stock. Theoretically, 100% of the copper can be recovered and there are two reasons for this: the sectors that register the highest recycling rates (constructions and infrastructure) will see copper immobilized for several decades due to the lifespan of the structures made. Instead, consumer goods, which have shorter lifespan, are recycled only at rates between 25% and 40%. Dispersive usages make recycling more expensive and less attractive. Therefore, the potential to increase copper recycling seems limited, without an attractive public policy for the sector.

Acting on the transport sector by implementing sustainable mobility policies would reduce global copper consumption by 2050 by 2.3% in a 2D scenario. Although this figure may seem low, given the general problem, it is geographically very differentiated, as it varies from 2 to 20%. Therefore, almost 18% of the consumption in Africa or Central Asia and almost 7% of the consumption in India could be avoided by 2050 by implementing a sustainable mobility policy.

Low carbon technologies in the power generation and transport sectors use more copper than the traditional technologies.

The risks this metal is exposed to are multiple: