The European Union (EU) has reached a renewable energy share in final energy consumption of 22.1% in 2020, exceeding the 20% target proposed in 2009. A step forward that hides different realities, depending on the country.

Renewable sources include biomass, geothermal energy, hydropower, solar energy, and wind energy. Although the share of energy from these renewable sources in the final energy consumption of the European Union has more than doubled since 2004 (9.6%), these energies represent a small part of the energy mix of the EU, dominated by oil and gas.

Main electricity source in Europe in 2020

For the first time in Europe, renewable energy has surpassed fossil fuels. According to the British think-tank Ember, 38% of electricity produced in the European Union came from green energy in 2020. This means by one percent more than fossil fuels, which cover 37% of the energy mix.

Although the results were encouraging, there are major geographical disparities. Above all, wind energy is the most used renewable source (14.4%). It is followed by hydropower (12.7%) and solar energy accounts for only 5.2% of electricity production. However, in the following years, the energy landscape could change. According to data from Ember, solar energy increased by 15% in a year, from 9%. If solar energy is facing such boom, it is probably due to the photovoltaic self-consumption. Households choose to equip with solar panels to produce their own electricity. This technology attracts more and more consumers, as it allows them to engage in energy transition and reduce their electricity bills. As highlighted by ekWateur, a supplier of green energy, switching to self-consumption “represents an average reduction by 30% in energy bills”.

With 68% of energy produced from renewable sources in the gross final consumption, Sweden was in 2020 the most advanced country in the European Union in this field. It therefore surpassed Finland (43.8%), Latvia (42.1%) and Austria (36.5%). At the other end of the ranking, Malta (10.7%), Luxembourg (11.7%) and Belgium (13%) had the lowest shares of renewable energy in the gross final energy consumption in the same year. Among all the Member States, three have reached their target without exceeding it: Slovenia (25%), the Netherlands (14%) and Belgium (13%). Only France hasn’t fulfilled its commitment, with only 19.1% renewable energy in its mix.

These differences can be explained especially through various political ambitions within the countries. Some European governments, for example, establish stimulating schemes, such as high carbon taxes, or promote the use of the use of renewable energy through public investments. 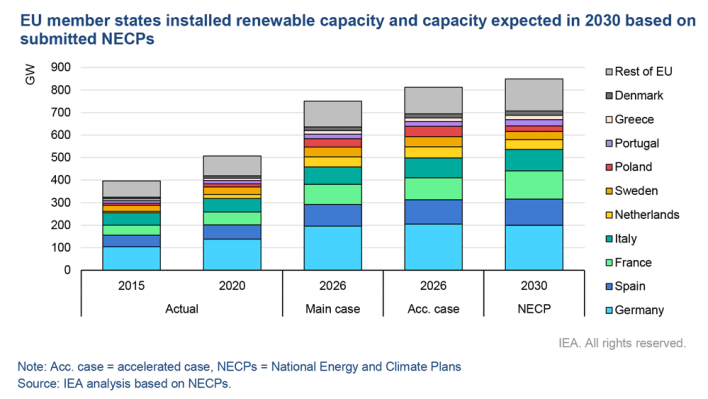 Target met for the EU in transport

Eurostat shows that the European Union has managed to reach its target in the transport sector. In 2020, 10.2% of the energy used in the transport sector was of renewable origin (biofuels, biomethane, hydrogen or electricity), for a global target of 10%. This result was possible by increasing this share in all Member States between 2019 and 2020 – except for Finland and France.

Solar energy, the source with the fastest growth

Wind and hydro power accounted for two thirds (36% and 33% respectively) of the renewable energy produced in Europe in 2020. Solar energy, on the other hand, is the source with the fastest growth. From 1% in 2008, for 7.4 terawatt hours (TWh), its share increased to 14%, to 144.2 TWh twelve years later. Moreover, heat and cold production came, on average, 23% from renewable energy in 2020.

Following the European elections in 2019, the new European Commission led by Ursula von der Leyen launched a climate roadmap. It includes several new measures that target reaching carbon neutrality at EU level by 2050. To achieve this ambition, the European executive put on the negotiating table the ‘Fit for 55’ package in July 2021, which, among other initiatives, includes an enhanced objective: increasing the share of energy in Europe to 40% by 2030, while the current threshold is 32%.

For the next decade, the new values were also set in the target climate plan for 2030 and are renewed within the Green Deal. By that time, the level of greenhouse gas emissions should have dropped by 55% compared to 1990.

Wind energy is an intermittent energy source, not being produced on demand, but depending on weather conditions. Wind energy requires production or storage facilities during its periods of unavailability. The share of wind energy in global production reached 5.9% in 2020. The main producing countries are China (29.6% of the world total in 2020), the United States (21.5%) and Germany (8.2%).

According to the annual statistics published by the International Renewable Energy Agency (IRENA), over 260 gigawatts (GW) of renewable energy capacity were installed last year, representing a 50% faster increase than that recorded in 2020.

The relative increase in renewable sources is partially explained by the decrease, in net terms, in the fossil fuel-based electricity generation capacity in Europe, North America and, for the first time, in Eurasia (Armenia, Azerbaijan, Georgia, Russian Federation, and Turkey). In total, 60 GW of fossil fuel-based new capacity were created in 2020, compared to 64 GW in the previous year, which shows that the slowdown of fossil fuel expansion continues. 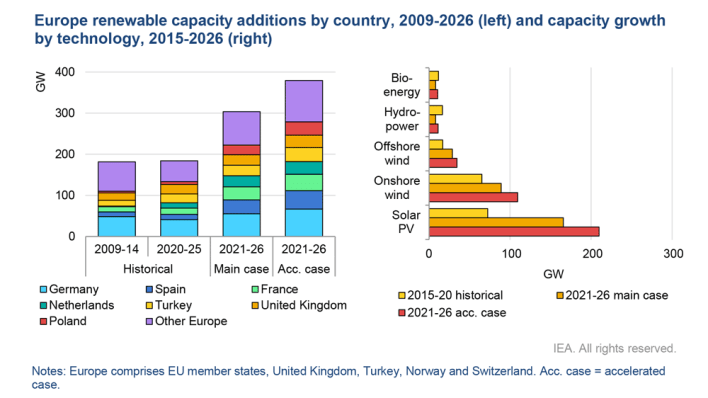 25% of Europe’s electricity could come from the sea in 2050. A significant effort representing the equivalent of five times the French nuclear fleet, also contributing to the net-zero emission target set for 2050.

The European strategy also aims to address the entire offshore wind energy chain, including the wind turbine manufacturing process and the development of port infrastructure.

The EU has the largest maritime area in the world. It is in a unique position to develop renewable energy at sea, due to the diversity and complementarity of its maritime basins.

The North Sea, the Baltic Sea, the waters of the Atlantic Ocean in the EU, the Mediterranean Sea, the Black Sea, the EU islands, as well as the many European outermost regions and overseas countries and territories have the natural potential to host these various renewable technologies.

According to this European strategy, the EU countries will therefore make available 3% of the available maritime space.

Romania, on the road to renewable energy

To reach the new EU targets for 2030 (reducing greenhouse gas emissions by 55% compared to the 1990 levels, the 32% share of renewable energy in the energy mix and reduction of energy consumption by 32.5%), each Member State had to prepare an Integrated National Energy and Climate Plan (INECP) for the period 2021-2030. It describes how it intends to act in five priority areas: energy efficiency, renewable energy, reduction of greenhouse gas emissions, research and innovation and electricity network interconnection.

In 2020, electricity production in Romania came at a rate of 12.4% from wind sources, 3.4% from photovoltaic panels and 27.6% from hydro sources. In total, renewable energy production (wind, solar and biomass) accounted for 16% of the total.