The International Energy Agency (IEA) special report on Carbon Capture Utilisation and Storage ‘CCUS in clean energy transitions’ shows that one of the key technology areas for putting energy systems around the world on a sustainable trajectory will be carbon capture, utilisation, and storage (CCUS).

IEA has long highlighted that there are no single or simple solutions to reaching international energy and climate goals. Doing so requires a wide range of technologies, some more mature than others. Its revamped Energy Technology Perspectives series, of which this special report is a key part, has done important work in illuminating the contours of the major energy technology challenges we face today – and how to overcome them.

In a path towards meeting international goals, CCUS is the only group of technologies that contributes both to reducing emissions in key sectors directly and to removing CO2 to balance emissions that cannot be avoided. This is a critical part of reaching ‘net zero’ targets.

Today, there are only around 20 commercial CCUS operations worldwide – nowhere near the amount required to put global emissions on a sustainable path. But momentum is growing – and through smart policies, investments and international co-operation, governments and companies across the globe can give CCUS the boost it needs.

The United States has helped spur the development of Carbon Capture Utilisation and Storage facilities in its energy system through its innovative 45Q tax credits. And just before the launch of this special report in September 2020, Norway showed its leadership in Europe by making a major funding commitment to the Longship project. Longship will connect two different plants capturing CO2 in Norway with the Northern Lights storage facility deep under the North Sea. Northern Lights will be able to receive CO2 captured in neighbouring European countries, as well, thereby playing an important role in meeting not just Norway’s ambitious climate goals but those of the entire region.

Plans for more than 30 commercial Carbon Capture Utilisation and Storage facilities have been announced in the last three years – mainly in Europe and the United States, but also in Australia, the People’s Republic of China, Korea, the Middle East and New Zealand. Projects now nearing a final investment decision represent an estimated potential investment of around USD 27 billion – more than double the investment planned in 2017.

“Co-operation – across borders, and between government and industry – is critical if CCUS is to grow at the pace needed to meet energy and climate goals. The IEA is committed to playing a leading role in those efforts, as demonstrated by this special report and the ongoing work of the Agency’s team of CCUS analysts. Markets alone will not turn CCUS into the clean energy success story it must become. But governments and industry today have the chance to combine their forces to realise the environmental and economic benefits that CCUS offers. Without it, our energy and climate goals will become virtually impossible to reach,” Dr. Fatih Birol, Executive Director of the International Energy Agency, stated.

A new dawn for a vital technology area

Carbon capture, utilisation, and storage (CCUS) will need to form a key pillar of efforts to put the world on the path to net-zero emissions. A net-zero energy system requires a profound transformation in how we produce and use energy that can only be achieved with a broad suite of technologies. Alongside electrification, hydrogen, and sustainable bioenergy, CCUS will need to play a major role. It is the only group of technologies that contributes both to reducing emissions in key sectors directly and to removing CO2 to balance emissions that cannot be avoided – a critical part of ‘net zero’ goals.

Stronger investment incentives and climate targets are building new momentum behind CCUS. After years of slow progress and insufficient investment, interest in CCUS is starting to grow. Plans for more than 30 commercial facilities have been announced in the last three years. And projects now nearing a final investment decision represent an estimated potential investment of around USD 27 billion – more than double the investment planned in 2017. This portfolio of projects is increasingly diverse – including power generation, cement and hydrogen facilities, and industrial hubs – and would double the level of CO2 captured globally, from around 40 million tonnes today.

Support for CCUS in economic recovery plans can ensure the Covid-19 crisis does not derail recent progress. Despite almost USD 4 billion in government and industry commitments to CCUS so far in 2020, the economic downturn is set to undermine future investment plans. CCUS is in a much stronger position to contribute to sustainable recoveries than it was after the 2008-09 global financial crisis. Since then, deployment has tripled (albeit from a small base), the range of demonstrated applications has expanded, costs have declined, and new business models have emerged. 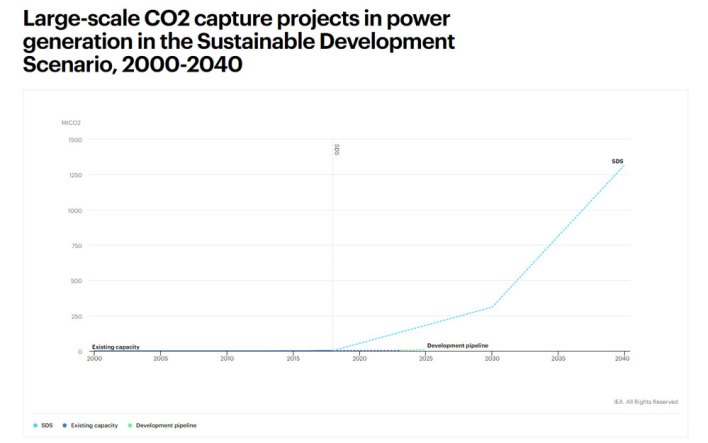 CCUS grows and evolves on the path to net zero

In a transition to net-zero emissions, the role of CCUS evolves and extends to almost all parts of the global energy system. In the IEA’s Sustainable Development Scenario – in which global CO2 emissions from the energy sector decline to net zero by 2070 – the initial focus of CCUS is on retrofitting fossil fuel-based power and industrial plants and supporting low-carbon hydrogen production. By 2030, more than half of the CO2 captured is from retrofitted existing assets. Over time, the focus shifts to CO2 capture from bioenergy and the air for carbon removal – and as a source of climate-neutral CO2 for synthetic aviation fuels. In this scenario, around 60% of CO2 capture is linked to fossil fuels, and the rest is from industrial processes, bioenergy, and the air.

CCUS is one of the two main ways to produce low-carbon hydrogen. Global hydrogen use in the Sustainable Development Scenario increases sevenfold to 520 megatonnes (Mt) by 2070. Most of the growth in low-carbon hydrogen production is from water electrolysis using clean electricity, supported by 3 300 gigawatts (GW) of electrolysers (from less than 0.2 GW today). The remaining 40% of low-carbon hydrogen comes from fossil-based production that is equipped with CCUS, particularly in regions with access to low-cost fossil fuels and CO2 storage. CCUS-equipped hydrogen facilities are already operating in seven locations today, producing 0.4 Mt of hydrogen – three times as much hydrogen as is produced from electrolysers.

A faster transition to net zero increases the need for CCUS. Carbon Capture Utilisation and Storage accounts for nearly 15% of the cumulative reduction in emissions in the Sustainable Development Scenario. Moving the net-zero goalposts from 2070 to 2050 would require almost 50% more CCUS deployment.

Underpinned by CCUS, carbon removal plays an important role in the net-zero transition. Technology-based carbon removal approaches are needed to balance emissions that are technically difficult or prohibitively expensive to eliminate. When net-zero emissions is reached in the Sustainable Development Scenario, 2.9 gigatonnes (Gt) of emissions remain, notably in the transport and industry sectors. These lingering emissions are offset by capturing CO2 from bioenergy and the air and storing it.

CCUS facilities have been operating for decades in certain industries, but they are still a work in progress in the areas that need them most. Carbon Capture Utilisation and Storage has primarily been used in areas such as natural gas processing or fertiliser production, where the CO2 can be captured at relatively low cost. But in other areas, including cement and steel, CCUS remains at an early stage of development. These are the sectors where CCUS technologies are critical for tackling emissions because of a lack of alternatives.

With ample storage available, success will hinge on getting the infrastructure right

Infrastructure to transport and store CO₂ safely and reliably is essential for rolling out CCUS technologies. The development of CCUS hubs – industrial centres that make use of shared CO2 transport and storage infrastructure – could help accelerate deployment by reducing costs. At least 12 CCUS hubs are in development globally – including in Australia, Europe, and the United States – and many of them are linked to low-carbon hydrogen production. Norway’s Northern Lights project, a large offshore CO2 storage facility in the North Sea, could provide a solution for emissions from neighbouring countries.

Major CO2 emissions sources are within reach of potential storage. IEA’s detailed analysis in this report of CO2 emissions from power and industrial facilities in the People’s Republic of China, Europe and the United States finds that 70% of the emissions are within 100 km of potential storage, a relatively practical and cost-effective range for transporting the captured CO2. In the United States, CO2 captured at existing facilities is transported an average of 180 km. But shorter distances can reduce costs and decrease infrastructure development times. The overall technical capacity for storing CO2 worldwide is vast, but detailed site-specific assessment is needed.